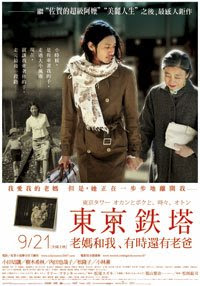 Reviewed by Chris MaGee
My Mom would always cry when she watched movies, usually hokey, sentimental movies, sometimes even comedies. She would especially cry at movies during Christmas time. When I was little it confused me. As I got older it embarrassed me. Once I was a young man the tears became a bit of an inside joke between Mom and I. I instinctively knew which kind of scenes would set her off; parents imparting wisdom to their children, tearful goodbyes and reunions, idyllic yet transitory moments of happiness, and of course deaths or funerals. “Uh oh, better get the Kleenex,” I’d tease her. She’d laugh, her eyes brimming, “I cry because it’s true,” she’d say.
There are plenty of parent/ child moments, goodbyes and reunions, and ultimately a death and a funeral in Joji Matsuoka’s “Tokyo Tower: Mom, Me and Sometimes Dad”, the winner of the Best Picture award at the 2007 Japanese Academy Awards. Based on the autobiographical novel by Renaissance man Masaya Nakagawa, a.k.a. Lily Franky (he writes, is an illustrator, musician, actor, and media personality, etc.) it’s a record of Franky’s youth and adulthood. Things start out in the present with Masaya (Jô Odagiri) keeping vigil beside his mother, Eiko’s hospital bed. Outside the window Tokyo Tower, Japan’s own Eiffel Tower, glows against the night sky. From this point the story of Masaya’s family and boyhood is told in flashbacks.
Life in Masaya’s paternal grandmother’s house isn’t fun. Masaya’s father (Kaoru Kobayashi), a painter and architect, spends his nights drinking himself senseless, only returning home when it’s time for his wife Eiko to clean up the mess (literally). After one too many of these nights Eiko decides to leave her husband and takes Masaya to her own mother’s home in a rural mining town. From there Masaya’s life runs hot and cold, weekends in Tokyo watching Dad drinking, yelling, commiserating with prostitutes, and drawing, while life in the country with Mom all seems to blur together; she kills herself doing piecework at home and making tentative romantic steps with a new man (yet another cameo appearance by the ubiquitous Sususmu Terajima). The back and forth leaves Masaya split. On the one hand he wants to follow in the free-wheeling footsteps of his father and the other he desires to free his mother from a life of drudgery. It takes several years of studying art and living the bohemian life in Tokyo before Masaya decides on what’s important. After Eiko has a brush with thyroid cancer everything changes and Masaya knuckles down, becoming a successful illustrator/ columnist/ and disk jockey. With a little money in the bank he can finally “free” Eiko and bring her to live with him in Tokyo.

For a little while the dream is achieved and Eiko becomes the “Okasan” to Masaya’s girlfriend and friends, but after some problems swallowing and stomach upsets it’s discovered that Eiko’s cancer has returned and it’s terminal. Now it’s Masaya’s turn to return the favour of all the the years that Eiko emotionally and financially supported her son, and that brings us back to Masaya sitting beside her hospital bed with Tokyo Tower outside the window.
Throughout “Tokyo Tower” I could feel Matsuoka tugging my emotions this way and that. Each scene between Masaya and Eiko is designed to build you up for the inevitable sad ending that we’ve known is coming since the first five minutes of the film. Those parent/ child moments, goodbyes and reunions, Eiko’s death and funeral are tweaked to make them that much more joyous, or heartbreaking by being accompanied by a treakly orchestral score and slow motion photography. I don’t usally respond to these kind of hokey and manipulative tactics, but the honest and insightful performances of the real life mother/ daughter acting team of Kirin Kiki and Yayako Uchida as the elder and younger incarnation’s of Eiko won me over, especially those Kiki shares with Jô Odagiri, when mother and son finally realize that they’ll soon have to say goodbye for good. Through these scenes I relived the last few weeks of my own mother’s life, and in spite of myself I cried, because like Mom used to say these moments were true, and it’s because of this that I would highly recommend “Tokyo Tower” and it’s because of this I dedicate this review to my mother, may she rest in peace.
Posted by Chris MaGee at 9:11 AM