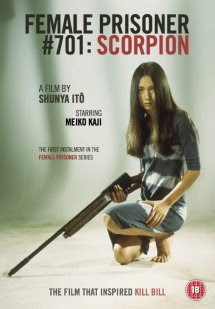 "To be deceived is a woman's crime."

Female Prisoner #701: Scorpion is the first in a series of 4 films starring the beautiful and fierce Meiko Kaji as the titular prisoner. Though it's essentially a women in prison film, it covers much wider ground than just straight exploitation and does so with style-a-plenty. As the movie opens, we see Kaji and another prisoner escaping. They are re-captured and we are filled in with some of her background - she had been set up by her cop boyfriend and seeks revenge on him after being savagely raped by yakuza. Her attempt is unsuccessful and she lands in jail.

The film falls squarely into the Pinky Violence genre of 60-70s Japanese cinema. The plot is littered with nudity and violence, but there's usually at least some additional context or reason for those scenes. For example - both the shower scene as well as the one where the naked prisoners walk over a small metal bridge are designed to show the guards as they really are - slobbering oogling fools who need to have some kind of control over women. 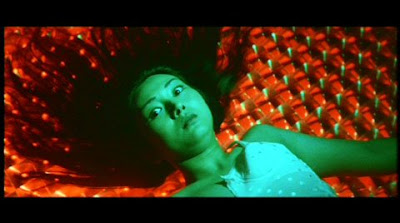 In these early scenes, we see this hierarchy of power - from the prison warden to different levels of guards and even prisoners in different coloured uniforms. This and the strong patriarchy of Japanese society seem to be recurring themes in the film that our heroine battles against. Her character rarely speaks during the film and this only heightens her apparent strength and resolve. And with an intense stare (with just the hint of a sneer) that leaves no question what she thinks of its recipient, she is one woman not to be trifled with.

The film is filled with "broad" acting (big eyes, slack jawed stares, etc.), but it actually fits the occasional surreal atmosphere of blindingly red blood and sudden changes of lighting. And though all of this adds to the enjoyment of the film, it can be a bit difficult to watch as Kaji's character is made to suffer on several occasions by men and even her fellow female prisoners. Indeed she is the one who utters the quote at the beginning of this post, but her constant strength and resolve allow her to continue on and even sneak in a bit of vengeance upon those that deceived her...

Read more from Bob Turnbull at his blog.
Posted by Chris MaGee at 10:02 AM

Hey, guys. The poster you've got attached to this review is actually for the FIFTH film in the series, NEW FEMALE CONVICT SCORPION #701, starring Yumi Takigawa as Sasori, not Meiko Kaji.