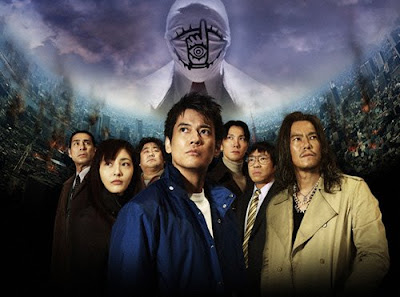 The first part of Yukihioko Tsutsumi’s manga inspired "Twentieth Century Boys" trilogy is still riding high at the Japanese box office, but it looks like someone out there in the blogosphere is already trying to drum up buzz for the second installment of the series. A new teaser for "Twentieth Century Boys 2" got posted on YouTube recently and now it's been picked up by Todd Brown at Twitch. The teasing feel of the trailers for the first film is gone and this one features a lot more balls out action, which is a good thing. This is turning out to be the most expensive Japanese film in history after all.

Click here to see what we'll have in store for us in 2009 when "Twentieth Century Boys 2" hits Japanese theatres.
Posted by Chris MaGee at 4:15 AM