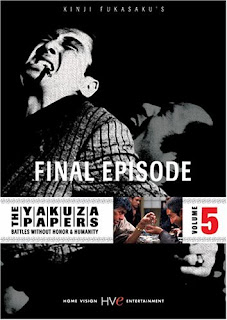 "When foolish men stand at the top, the men under them suffer and shed blood needlessly"

About a third of the way through "Final Episode", Shozo Hirono - the central protagonist through the 25 year span of the 5 films making up the "Yakuza Papers" series - comes to the above realization while in prison. It's probably the clearest statement of the major theme that has run through the entirety of the roughly 8 hour long epic story of the rise of the violent yakuza in Japanese society following the end of World War II. Though you can be forgiven if throughout the series you may have missed a few connections between the hundreds of characters (e.g. with 12 minutes left in this film, a brand new character is introduced complete with freeze frame and screen title), it's hard to miss the wider statement director Kinji Fukasaku has aimed at governments the world over.

When we left our battling yakuza families at the end of episode 4 ("Police Tactics"), the public had finally had enough of the violence that had poured into their streets. Along with the desire to look good to the rest of the world during the 1964 Tokyo Olympics, the police and justice system finally respond to that public pressure and start to clamp down. Those yakuza who managed to avoid jail, begin to re-invent themselves for a new society in the form of political entities. In this talkiest entry of the series, we focus on the Tensei Coalition - the new political group headed by Akira Takeda, former yakuza and rival of Shozo Hirono. But as we see the group marching respectably in an anniversary march in remembrance of the atomic bomb, the audience is told up front that despite their new status, the coalition will be responsible for more bloodshed. From a small tussle in a bar between Tensei men and young supporters of the still jailed Hirono, we see grudges and promises of vengeance build. These problems stem mostly from the old guard - Tensei's Otomo (played to over the top perfection by Jo Shishido) and Hirono's sworn brother Ichioka both have a tendency to bluster on about the yakuza code and demand vengeance. They have no thoughts about how a violent payback now might affect others down the road as well as continue the cycle of brutal killings. Otomo insists that the young Tensei members involved in the punch-up cut off a finger as punishment. 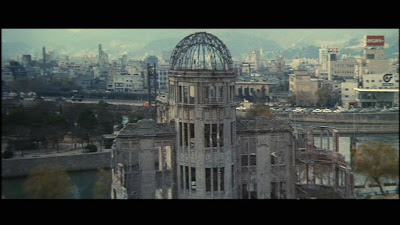 Takeda rules Tensei with an even temper though and turns control over to the younger strategic Matsumura. Even when the financial advisor for Tensei is murdered (as part of Ichioka's retaliation), the young leader manages to calm the group and withstand Otomo's attempts to go back to the old ways. Matsumura actually plans his next moves and anticipates what the reactive Otomo and his people will do. He is smart, cautious and tries to do right for the coalition. So of course he gets slandered and rumours begin behind his back. The old guard are being replaced slowly, but will they really make a difference? Will change truly come or will is it just a changing of the guard?

As always with Fukasaku's style, he brings great energy to the street fights and action scenes. It's chaotic and messy, but it gives you a great feel for the completely unplanned nature of most of the violence. Fukasaku also attempts to bring some fun to the proceedings - whether it's through the re-appearance of the incredibly slimy Yamamori (complete with his effeminate pursed lips and dirty old man persona), the low guttural responses of Shishido's Otomo or the continued ineptitude of the young assassins (says one of the survivors of an attack - "it's really hard to hit things with bullets"). The thrusting of the guns as they get fired does look a bit silly, but it does help to highlight the extreme stupidity and pointlessness of these street attacks.

As the prime example of "Jitsuroku" (films based on documented true life stories), the entire "Yakuza Papers" series uses these stories of gang violence to not only lead us through 25 years of change within Japan, but also to highlight the insanity of war in general and the power plays of governments all over the world. As the film concludes with narration asking "Will the bitter battles that arise from the strong preying upon the weak ever be banished from this earth?", the camera pulls out to once again show (4 of the 5 films in the series end on this same image) the bombed out carcass of one of the buildings left standing in Hiroshima. Fukasaku may not be overly hopeful regarding the answer to this question, but he sure doesn't mind asking it.

Read more from Bob Turnbull at his blog.
Posted by Chris MaGee at 3:19 PM