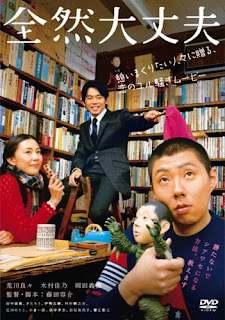 Maturity is a very relative thing these days. I remember when I turned 25 and I thought, "Okay, you had your fun. If you screwed up before 25 it was fine, but from now on you don't have an excuse." Of course I found excuses and kept screwing up. Then my 30th birthday came, "Well, time to get serious, old man," and I tried, really, but it didn't always stick. Just past 35 now and I have this Japanese film blog with readers around the world, a definite success in my books even though I may not have a fancy office or a decent salary; but that begs the question: What does it mean to be mature? To "grow up"? How can you negotiate a happiness as an adult without giving up who you are? It's these questions that three friends wrestle with in Yosuke Fujita's eccentric but genuinely heartfelt 2008 comedy "Fine, Totally Fine."

Teruo, played perfectly by comedian YoshiYoshi Arakawa (Survive Style 5+, Ping Pong), is a gentle, nerdy guy just short of his 30th birthday who has one mission in life: to scare the living hell out of people. His room in the apartment he shares with his father above the family's used bookstore is filled with fake severed limbs, skeletons, pictures of himself Photoshopped to look like Dracula and plastic monster models many of which sport a mini-Teruo head. As he explains to a friend (while wearing a rubber Cyclops mask no less) his collection of horror memorabilia and his constant terrifying pranks act as research for his real job, his real dream: to open up a haunted house where people can pay admission to be frightened. With all his energy focused on this he doesn't have a lot of time for a traditional career, so he holds down a job as a tree trimmer for the city. It might not be glamorous, but it pays for the fake blood...

Teruo's boyhood friend Hisanobu (Yoshinori Okada), who's also on the eve of turning 30, wants more out of his life than being Teruo's accomplice in fear, but the problem is he's not quite sure what that is yet. He's got a respectable job working as a hospital administrator, but it doesn't seem to bring him any happiness or satisfaction. His co-workers like him, in fact his female employees think he's a real catch, but he's yet to meet the right woman. He's in a holding pattern between what has been and what might be... and to add more to his plate he's got to hire a new janitor for the hospital. 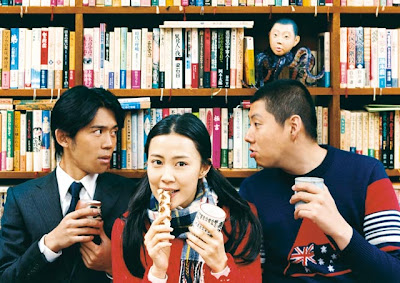 Enter Akari (Yoshino Kimura), a painter who spends her days eating fish sausages and spying on her artistic muse, a homeless woman who collects discarded toys and junk. The pastel sketches Akari does of the woman show real talent, but they don't pay the bills so when she hears of the new position at the hospital heads over with resume in hand. She gets the job, but it doesn't help that she's a champion klutz who can barely open a box of Kleenex let alone clean sensitive medical equipment. After one mishap too many she fired, but not before Hisanobu and Teruo each develop a crush on her. Will these three misfits find their place in life and achieve their dreams? Those re the questions that lay at the heart of "Fine, Totally Fine".

And it's here that I have to stress "heart" again. First time director Fujita, who worked for nearly a decade as a hospital janitor to subsidize his filmmaking dreams treats his three leads with immense empathy and respect regardless of how goofy they are. He knows better than anyone how important it is to follow your true calling even if it means that you might not end up with the big car and house to show for it. Fujita drives this point home by having Teruo's father overcome a serious depression, but only after disappearing for a while and discovering that his true bliss lies in writing and singing songs about things he loves... like a nice hot bowl of rice.

Let's hope that Fujita never has to go back to his day job mopping hospitals after this, because
"Fine, Totally Fine" is the rare kind of a comedy that can appeal to a wide range of viewers; from people who prefer off-kilter humour along the lines of Katsuhito Ishii's "The Taste of Tea" to people who like a bit of inspiration mixed in with their laughs like in Masayuki Suo's contemporary classic "Shall We Dance?" Highly recommended.
Posted by Chris MaGee at 3:28 PM