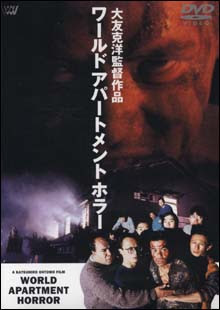 Imagine this dream line-up: a film directed by “Akira” creator Katsuhiro Ôtomo with a screenplay based on a story by Satoshi Kon, the man who brought us “Millennium Actress” and “Paprika” and starring Hiroyuki Tanaka, a.k.a. Sabu, a director in his own right with films like “Unlucky Monkey” and “The Blessing Bell”. It’s like a Japanese film fan’s wet dream, but the best thing about it is that you don’t have to imagine it. The three did come together for the 1991 film “World Apartment Horror,” a broad satire of immigration in Japan based around one run down apartment building.

Young yakuza Ita, (Tanaka) is ordered by his bosses to succeed where his gang brother Iri failed. The Kokuba clan has purchased a dilapidated apartment block with an eye to demolishing the building and redeveloping the land for profit. There’s only one problem. It’s not vacant. There was no problem getting rid of the Japanese that were living on the ground floor, the yakuza threw a little money there way, growled a bit and they were gone. Not so with the gaijin on the second floor. They just don’t get the hint and when Iri moved into the building to scare them out he somehow ended up getting himself scared, went crazy and disappeared. Now Ita has exactly a week to get these foreigners out of the building so the bulldozers can move in.

It’s a great set up and with the stellar talent in front and behind the camera I had high hopes going into “World Apartment Horror,” based on a manga by Ôtomo’s then protégé Satoshi Kon, but you know what happens when you have high expectations, right? They rarely get met, but I’m happy to report that except for a few minor bumps this dream project delivers and mainly because it doesn’t give viewers what they expect. 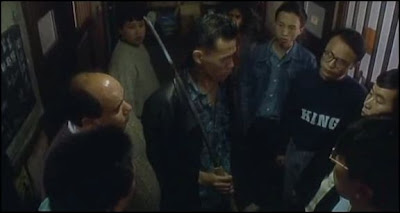 First off the title is a bit misleading. The last thing “World Apartment Horror” is is a full-fledged horror film. Yes, there is a supernatural element to the plot with Iri’s old ( and Ita’s new) apartment supposedly being haunted, but besides Ôtomo doing a masterful job setting up a haunted house mood the ghost at the end of the hall is repeatedly upstaged by the tenants living on the floor. With a middle-aged Pakistani man, a Filippino who works as a doorman at a hostess bar, a group of Chinese workers who have a thing for mahjong, a nearly mute man from India and a Taiwanese student learning Japanese the inhabitants of the building represent a cross section of the rest of Asia, with Ita standing in for the insular Japanese who would much rather have these gaijin back in their own countries. The culture clash, although motivated by prejudice and intolerance never comes across as ugly. Instead the run-ins between Ita and his new neighbours are hilarious. Yes, “World Apartment Horror” is a comedy.

Ita threats and declarations that he’s yakuza are met with the Chinese workers thinking his name is “Mr. Yakosan”. His late night howling karaoke sessions backfire and have the tenants dancing in the hallways. Even when Ita goes so far as to have sex with his girlfriend in the open doorway of his apartment the gaijin use the opportunity to gawk and then go about their nightly business. One after the other Ôtomo and Kong ice us classic comedic episodes and Tanaka is perfect as the bewildered gangster. It’s only as Ita’s resolve begins to weaken and the evil spirit in his apartment makes him more and more paranoid does “World Apartment Horror” begin to falter, but only because the foreign actors have more to do than act the fool. None of them will ever win an Oscar, let’s put it this way, but in terms of the plot I really liked the fact that these poor immigrants are the first people to come to Ita’s aid when the ghost inhabiting the building finally possesses him.

Equal parts broad comedy and biting social metaphor “World Apartment Horror” is a work by Katsuhiro Ôtomo that should be better known. What better way to be reminded of the importance of tolerance and understanding than through a little laughter?
Posted by Chris MaGee at 1:47 PM