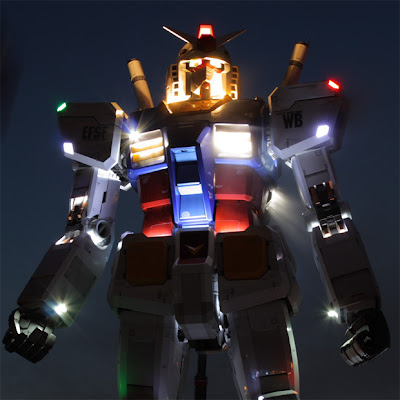 Okay, I don't know if they say "RX-78-2 Gundam GO!" in Mitsuteru Yokoyama's "Mobile Suit Gundam"... in fact I think that was "Thundercats", but I never professed to be an anime aficionado. I'm much more of a live-action Japanese film fan, but... I digress. Most of you know that we've been following the construction of the life-size scale model of the RX-78-2 Gundam robot from Mitsuteru Yokoyama's seminal anime series "Mobile Suit Gundam" since it was announced back in March. It's been a huge undertaking, one that was precipitated by the 30th anniversary of the series, and one that you'd think would take forever. We're talking 59 feet of steel and fiber glass here. I wasn't surprised when photos appeared online at the beginning of the month showing the model being completed only up to the waist, but I was surprised this week when photos and videos popped up everywhere showing the Gundam Suit completed... and lit... and moving! Like I said, I'm no anime aficionado, and I'm not that familiar with the series, but even I get the "Gee whiz!" factor when I saw this YouTube video below. Check it out to see if your inner geek doesn't get even a wee bit excited seeing a giant robot surveying the crowd in Odaiba.