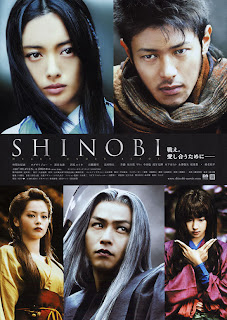 Wuxia is one of the most popular genres in Chinese fiction. Generally, the kinds of stories it provides are period-set tales of adventure and romance, with the wuxia hero as a righteous figure skilled in martial arts. While fantasy isn’t a strict requirement, the recent boom in wuxia fiction (led by such films as "Crouching Tiger, Hidden Dragon", "Hero", "House of Flying Daggers" and "Curse of the Golden Flower") has prominently featured supernatural abilities such as gliding and uncanny feats of strength and agility.

Ten Shimoyama’s "Shinobi: Heart under Blade" can be seen as a Japanese equivalent to a work from this specific, fantasy-based branch of wuxia. Its key figures, the Shinobi, are magical beings who possess unique skills and properties, contributing to their highly revered – and feared – stature as warriors. Set in the year 1614, the main story focuses on two rival Shinobi clans known as the Manjidani Koga (based in a hilltop fortress) and Tsubagakure Iga (who reside in a river valley). A plan is devised by the reigning Lord’s military advisor in which each clan will choose their five best Shinobi to fight the other’s to the death, the prize being the right to succeed the Shogun. However, the scheme is actually intended to completely wipe out the Shinobi, who represent a very real danger to the shogunate authority. 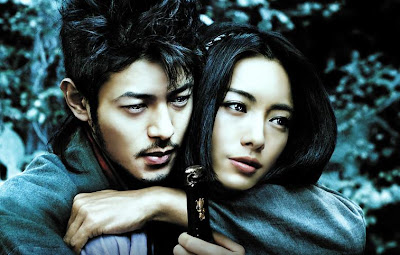 Beneath this framework, there is the story of Gennosuke of the Manjidani and Oboro of the Tsubagakure, heirs to their respective clans who meet in a forest one day and fall in love. While Gennosuke fiercely clings to the hope that they may one day wed, Oboro resigns herself to the reality that they can never escape their destiny to be enemies. The storyline is clearly taken from Romeo and Juliet (Oboro even repeatedly utters the line “Our stars have been crossed from the beginning”), but it works well enough here, especially alongside the film’s main source of conflict: the Shinobi’s status as living weapons. They know all too well that their sole purpose in life is to fight; without war, they are obsolete. Yet Gennosuke stubbornly tries to deny their nature, refusing to fight and seeking a peaceful solution for as long as he can.

"Shinobi" is chock full of fight sequences, but they aren’t limited to swordplay as in regular jidai-geki, but instead feature a wide array of fighting methods – many of them unapologetically fantastical and often aided by CGI. Along with swords, the Shinobi use chains, throwing darts, clouds of poison and, most unusually, one character’s long and deadly robe sleeves. The warriors chosen by each clan are creatively diverse and have their own unique talents. Among them is a pale, hairless shape-shifter who hides behind a mask for most of the film, a silver-haired immortal, a poison-bearing vixen and a fur-clad wild man who sports Wolverine-like claws. Surely enough, a valid comparison can be made between "Shinobi" and "X-Men", especially when it comes down to all the fun to be had in watching so many feats of power and combat on display in the many one-on-one battles.

"Shinobi: Heart under Blade" is a work of fantasy that, while enjoyable, doesn’t really do anything new. It takes from and is of a long line of storytelling traditions that are integrated into popular culture – to the point that it even features the legendary character Hattori Hanzo (presumably the same one Sonny Chiba played on the Japanese TV show "Shadow Warriors" and who is an ancestor of Chiba’s swordmaker-turned–sushi shop owner of the same name in "Kill Bill"). In fact, I’m surprised that the film isn’t part of a series since the world it constructs is certainly vast and rich enough to support one of decent quality. Regardless, the film proves once more that people love to experience the same kids of stories over and over again, be they about Shinobi, samurai, wuxia heroes, Jedi or mutants. While it achieves some depth with its love story, "Shinobi" primarily succeeds as a solid, visually pleasing, action-packed piece of entertainment.

Read more by Marc Saint-Cyr at his blog.
Posted by Chris MaGee at 4:54 PM