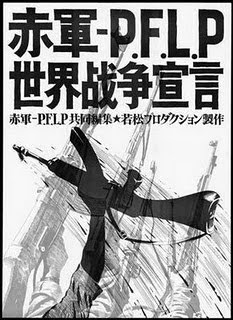 In 2008 pink film legend Koji Wakamatsu released "United Red Army", the story of the creation and of the ultra-leftist armed revolutionary group in 1970 and its eventual implosion two years later. The film was a labour of love and dedication for Wakamatsu (he mortgaged his own home to finance the film and then blew it up for one particular scene) as he was and his frequent writer, co-director/ producer Masao Adachi were actively involved in the underground student movements and left wing organizations that birthed the United Red Army in July of 1971. It was in that year that both filmmakers met with United Red Army members Fusako Shigenobu and Mieko Toyama in Palestine where the two women where working in solidarity with the Popular Front for the Liberation of Palestine (PFLP). To mark the occasion Wakamatsu and Adachi created "a news film for the construction of The Red Army" titled "The Red Army/PFLP: Declaration of World War". For Adachi, who wrote Wakamatsu's most recognized films, 1969's "Go Go Second Time Virgin" and 1972's "Ecstasy of the Angels", this film would be a a declaration of purpose as three years later would leave Japan for 26 years after joining the Japanese Red Army. Based out of Lebanon he, along with his comrades in the JRA became involved with the Popular Front for the Liberation of Palestine. He was eventually arrested in Jordan in 1997 due to passport violations, served a short stint in prison and deported back to Japan in 2001. Due to his involvement with the JRA in the Middle East he has been branded a terrorist by U.S. authorities and can't travel to the United States.

Adachi and Wakamatsu shot "The Red Army/PFLP: Declaration of World War" using their "landscape theory (fûkeiron)" formulated while making their co-directed 1969 film "A.K.A. Serial Killer". This stressed landscape over characters and situations and in "The Red Army/PFLP: Declaration of World War" this means that we're shifted from underground meetings of the JRA in Japan, PFLA training camps throughout the Middle East, and rundown communities of exiled Palestinians without any of the expected crutches of documentary filmmaking - no identifying bottom screen inter-titles, no personal interviews (only one member of the PFLP is identified obliquely as "Mr. Fedain"), in fact there are very few focused shots of people whatsoever. This may very well be due to the fact that many of the JRA and PFLP members were (and are) fugitives, but viewed through a revolutionary Communist perspective personalities aren't important. It's stressed continually by the Japanese narrator that amongst the ranks of this global revolution there are "no heroes", just the amorphous proletariat locked in constant warfare with world imperialism. If you want close-ups Adachi's and Wakamatsu's film is more than happy to oblige - with shots of rifles, machine guns and grenades. If you wanted to get a refresher on how to assemble a Kalashnikov or load a belt of ammunition into a machine gun then "The Red Army/PFLP: Declaration of World War" is definitely a help. 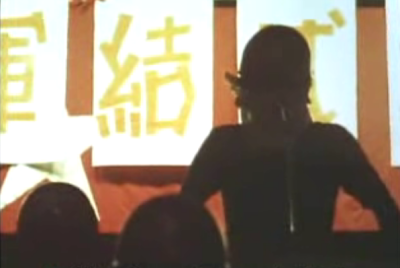 As revolutionary filmmaking and political propaganda "The Red Army/PFLP: Declaration of World War", with its loving shots of heavy artillary and onscreen, all caps slogans like "THE BEST PROPAGANDA IS ARMED STRUGGLE" and "WEAPONS ARE THE LANGUAGE OF OPPRESSED PEOPLE", is a definite success. This is undiluted revolutionary diatribe, and in a post-911 world of Iraq, "war on terror" and Al Qaeda Adachi's and Wakamatsu's film is as powerful (and to some people scary) as it was when it was originally released in 1971. The only buffer between our age of suicide bombings and terrorist plots and the early 70's struggles depicted in this film is that instead of the Koran in the hands of jihadists the PFLP members are repeatedly shown reverently leafing through Chairman Mao's Little Red Book. The concept of a "borderless army" is an uneasy prefigurement of the present dilemma that U.S. and European nations find themselves in - how do you fight a war against an idea?

While "The Red Army/PFLP: Declaration of World War" is required viewing for anyone interested in Wakamatsu's "United Red Army" be forewarned - it isn't a history lesson, isn't an objective documentary, isn't a human drama used to explore the motivations of a political revolutionary. What Adachi and Wakamatsu accomplished in 1971 was to create a weapon, and any weapon is simple a machine without a conscience. It is up to the person wielding the weapon (or in this case screening or viewing the film) to us it as a tool for positive social change or an extension of murderous extremism. If you want a narrative film to illustrate the inner workings of the United Red Army then it may be best to content yourself with Wakamatsu's account or seek out Kazuyoshi Kumakiri's harrowing 1997 feature debut "Kichiku: Banquet of the Beasts" that chronicles a fictitious leftist group based on The United Red Army.
Posted by Chris MaGee at 1:05 PM