REVIEW: School Days with a Pig 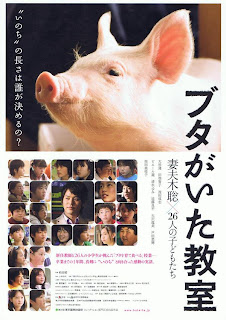 School teachers have a difficult job these days. Not only do they need to keep a classroom full of kids in line and attentive, but some parents expect more than just the curriculum basics to be taught. There's an expectation that they will learn "life lessons" that will stay with them forever. So what do you do if you're a rookie teacher taking over a Grade 5 class and bringing them all the way through to when they graduate Grade 6? You want to involve the whole class in a group project that will mean additional work and responsibility and somehow instill a larger meaning. Well, if you're Mr. Hoshi, you try something new. You bring a piglet to class and tell your students that they will all help feed and raise the pig until they graduate - at which point they will eat it.

If that sounds like an odd way to impart a lesson and even slightly far-fetched, then you might be surprised to know that the story that Tetsu Maeda's "School Days With A Pig" (screening at the upcoming Sprockets Toronto International Film Festival For Children from April 17-23) is based on is a true one and that there was even a documentary made to recount its events. In this fictionalized account, things play out pretty much as expected - the pig is adorable, the kids face challenges, grow to love it and then must decide whether they should go through with the original proposal of killing the pig for food. It's how the film does these things that is of greater interest. First off, though it occasionally struggles with a bit too much sentimentality (bordering on maudlin), it never preaches or forces a specific viewpoint. The film actually becomes its own teacher's aid to discuss the issue at hand - where does our food come from and should we not consider that when we eat it? The arguments pro and con regarding whether the pig (named "P-chan" by the students) should live or die at the end of their elementary schooling are expressed in equal portions and tone. Almost all of those opinions are expressed by the students themselves with little or no guidance from the teachers or admin staff. 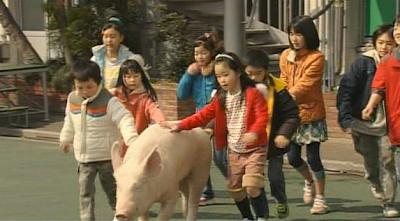 That brings us to one of the other interesting facets of the film. During two very long segments (one of which lasted a full 15 minutes), the children debate the issue amongst themselves with their teacher only stepping in to ensure that the discussion remains civil. Each position is covered from just about every angle as every child in the class gets their say. Apparently, Maeda filmed these scenes with numerous cameras in the class and with little to no script for the kids. The idea was to achieve a natural and realistic feel to the discussion. Though admirable and occasionally very effective, it doesn't quite work for several reasons. The child actors are actually quite good throughout the film, but for much of these debate sections it feels like they were given specific viewpoints to raise just so that all angles were covered. The back and forth flow seems hampered by this and it also extends the scene way past the point of being useful (and, frankly, entertaining - I expect that many of the 8-12 year old target audience might be shifting in their seats before long...). Where the film does shine, though, is when these kids are left to be themselves. Maeda captures several wonderful moments of almost documentary-like interactions between the kids as well as with P-chan. As long as the adults are off to the side and the kids can be themselves, the film has a fun charm to it that should easily translate to its audience.

One sequence in particular, however, simply does not work. Safe in their homes during a raging storm, each child (and there's about 20 of them) gets their own "gazing wistfully into the distance thinking about the safety of the pig" close-up moment. It's quite the misstep in an otherwise well-constructed, if slightly slow-paced, kids movie. It's overly long at 109 minutes and could have benefited from some trimming, but when you have so much great pig footage it can be forgiven somewhat. P-chan is cute as a button as a piglet and retains a high loveable quotient as he grows into a larger adult pig. You can see how the kids easily adopt the pig as their pet and don't mind bringing in leftover food from home to feed it or helping to build a lovely, colourful pigpen over a weekend. This certainly helps make the ever more difficult decision facing the children feel quite real. In the end, whether you agree with the final decision or not is somewhat moot - the point of the exercise (and of the film itself) is to get the kids to think about and discuss the issues. And hopefully learn something at the same time.

Read more from Bob Turnbull at his blog.
Posted by Chris MaGee at 2:55 AM