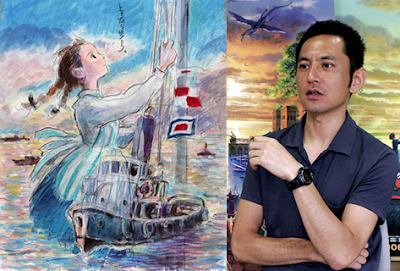 In the increasingly fickle landscape of the Japanese box office there is still one name that brings audiences flocking to theatres - Studio Ghibli. Many industry insiders felt that the Hayao Miyazaki's "Ponyo on a Cliff by the Sea" (along with Yojiro Takita's "Departures") buoyed up the Japanese box office in 2008 and one of the top earners of 2010 has been Studio Ghibli's "The Borrower Arrietty" directed by Hiromasa Yonebayashi. So what's next for Studio Ghibli? Well, this past week we found out.

All this week Anime News Network has been updating its site with news about the new Studio Ghibli film due out in the summer of 2011. Titled "Kokuriko-Zaka Kara" is follows the story of a teenage girl growing up in Yokohama in the early 1960's. With her fisherman father having been lost at sea and her photographer mother frequently away from home on assignment the film's heroine Komatsuzaki finds herself drawn to two of her classmates - a school newspaper reporter and the student council president.

"Kokuriko-Zaka Kara" is based on the popular shoujo manga created by Chizuru Takahashi and Tetsuro Sayama that originally ran in Kodansha's Nakayoshi Magazine in 1980. To bring the manga to the screen none other than Hayao Miyazaki has stepped in to co-write the screenplay with Keiko Niwa, the writer who penned the script for his son Goro's directing debut "Tales from Earthsea". Goro Miyazaki (above right) himself will direct "Kokuriko-Zaka Kara".

Besides the above concept sketch of Komatsuzaki no other images from "Kokuriko-Zaka Kara" have leaked out yet. Follow the link above to Anime News Network for even more details on this still developing story.
Posted by Chris MaGee at 9:43 AM