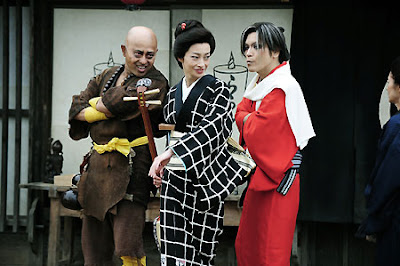 It was only a couple weeks ago that we posted a bizarre new teaser trailer for Hitoshi Matsumoto's third directorial effort, "Saya Samurai". It looks like after Matsumoto's kaiju spoof "Big Man Japan" and his surreal fantasy "Symbol" he will be taking audiences back in time to the Edo Period with a samurai adventure starring non-actor and Shinjuku bar owner Takaaki Nomi as a masterless samurai named Kanjuro. Besides that Matsumoto was keeping mum on additional details of his new film, but this week more casting news for "Saya Samurai" came via Tokyograph.

Joining Nomi in the film will be such names as talento Ryo, singer ROLLY, comedian Itusji Itao, Jun Kunimura, Tokio Emoto, Masato Ibu and Zennosuke Fukkin. 9-year-old Sea KUmada will be portraying Kanjuro's daughter Tae who accompanies her father as he goes on a "30-day job" that will clear him of a crime he has committed. Matsumoto is still on track to bring this new film to Japanese theatres on June 11th.

Thanks to Mantan Web for the above promo still from the film.
Posted by Chris MaGee at 2:39 PM