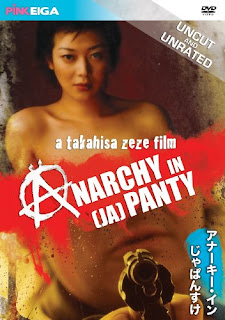 There are more than a few dysfunctional families in the world of Japanese cinema. With the domestic disintegration of the films of the beloved Yasujiro Ozu conflicted and broken homes could easily make up their own sub-genre of shomen-geki, or films of contemporary working class people. We've seen families trying desperately to hold together in films like Yoshimitsu Morita's "The Family Game", Toshiaki Toyoda's "Hanging Garden" and Kiyoshi Kurosawa's "Tokyo Sonata". One thing that we don't see that much of though are portraits of people who are trying to form some kind of family amongst the chaos of their lives. It's this unique angle that pink film director Takahisa Zeze presents us with in 1999's "Anarchy in Japansuke", re-titled "Anarchy in (Ja)panty" for its recent North American DVD release via the Los Angeles-based distributor Pink Eiga.

The film brings together an all-star cast, including pink film-maker and actor Kazuhiro Sano and actress Yumeka Sasaki, to tell the story of what happens when two apparent losers find each other and fall in love. These are Tatsutoshi, a man pushing forty who works in a convenience store by day and who plays ping pong and parties with a pair of equally under-achieving friends (Shiro Shimomoto and Taro Suwa) by night, and Miyuki, a punk rocker turned prostitute who works in a soap land club at night and takes care of her son Yoshiki by day. Miyuki's past is a fair bit more complicated than Tatsutoshi's drastically extended adolescence though. Zeze starts "Anarchy in Japansuke" in 1981 when, after she's been involved in a degrading, drug-fueled orgy, Miyuki finds herself at the crossroads of some very strange circumstances. After a dreamy montage shot through a kaleidoscope lens that could look like the haze of drugs or a view through tears, Miyuki stops to pee by the roadside she sees a married couple get out of their car, go behind a tree and begin to have sex. She approaches their vehicle and sees a baby boy in the back seat. Miyuki barely skips a beat and decides in that very moment that maybe a child will change her life for the better. She hops into the unlocked car and drives off with her new son, Yoshiki. 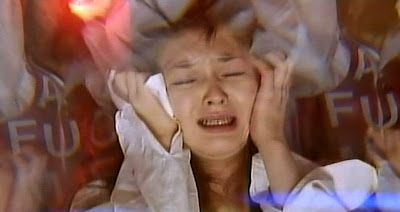 Jump ahead eight years and we find ourselves in the midst of Japan's heady Bubble Economy, but Miyuki and Tatsutoshi are as far from the financial feeding frenzy as you can get. The two encounter each other nightly as Miyuski brings Yoshiki to Tatsutoshi's convenience store for dinner, but their real connection, to put it mildly, comes later. After Tatsutoshi goes on a drinking binge and ping pong battle he treats his buddies to a night at a soap land (that's basically a brothel where the women bath and service the male clients for the uninitiated). While one heads off to indulge in some pervy infantilism involving his soiled adult diaper and the other can barely keep himself from passing out the paths of Tatsutoshi and Miyuki cross. It isn't love at first sight, as Miyuki is working during her period and manages to bleed all over Tatsutoshi. Still these two misfits end up being hentai, or "perverted", enough to hit it off and soon they have formed a family in Miyuki's apartment with little Yoshiki at the center.

I've often been at odds writing reviews of pink films as I'm not sure from which vantage point I should be viewing the film -- with my head or with my crotch, but in the case of "Anarchy in Japansuke" Zeze made it easy for me. Sure there is a decent amount of bumping, grinding and bare flesh in the early scenes of the film, but very soon I found myself caught up in this galaxy of low-lifes and the sex started taking a back seat. There were more than a few times when I felt like I was watching the work of Finnish film-maker Aki Kauismaki, a man who has made the lives of the befuddled and marginalized his specialty. Zeze brings a lot of empathy to these characters, even when they are far from sympathetic. Were these boozing, drugging, and genaerally bad behaving folks get their redemption is from their eventual love for each other. One scene in which a young Yoshiki tells his mother that if she believes in god then make him drink the glass of water Yoshikim is holding is as perfect as any scene from any other domestic drama I've ever seen, as is Miyuki's response. She leaves the glass on the counter for the water to evaporate. "That's how god drinks," she explains.

Where "Anarchy in Japansuke" fell from favour with me a bit was during it's final act when the now young adult Yoshiki begins to discover his true past and begins to lash out at the world around him, including his adopted father Tatsutoshi. I don't have much of a stomach for scenes of rape and rough sex, so I found myself zoning out during these sequences. Still despite this there is more to recommend about "Anarchy in Japansuke" than there is to warn off. The only thing I think potential viewers really need a warning about is not to expect a punk rock pink film! I found myself expecting the same thing, but despite one very early scene involving a guy with a mohawk with some Exploited posters on his wall there is no punk rock to be seen. If you want that rent Pink Eiga's release of Aoi Sora's "Tsumugi". For a pink film domestic drama grab "Anarchy in Japansuke", or "Anarchy in (Ja)panty".
Posted by Chris MaGee at 10:52 PM

Register on EverydayFamily TODAY and you will get stage based pregnancy and baby email newsletters, offers and coupon alerts as well as a wide range of free baby samples, coupons, baby magazines & more.

New Members Can Win Free Diapers for a Entire Year!