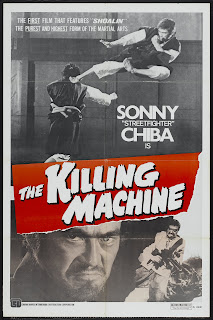 "The Killing Machine" is the third film in an Optimum Asia set of Sonny Chiba's 70s work - the other two being "Yakuza Deka" and "Yakuza Deka: Assassin" - and though it shares many attributes with those two (plenty of martial arts fight scenes, over the top bad guys, etc.), it differs in several major ways. The story of Doshin Soh's return to Japan after serving as a secret agent during WWII in Manchuria, "The Killing Machine" has a more serious (and occasionally overly melodramatic) tone to its plot. As "just one of the confused young Japanese to see the country's defeat", Soh struggles to keep himself out of trouble - not due to any criminal activites, but because of his need to right the many wrongs he sees committed by the growing power of the yakuza and the willingness of the police to be corrupted by them. The other main difference is a willingness of the film to step out beyond its simple story and look at the wider effects of the war on the people and state of Japan. You get a feeling by the end of the film that it's more a statement of how Japan regained its own strength and determination after the war and that the title of the film means something far different than you may have expected going in.

That's not to say that Doshin Soh isn't a one man wrecking machine himself. As the film opens and the war is just winding down, Soh is discovered by the Chinese to be a spy just as he learns about their upcoming secret attack. He proceeds to chop, punch and kick his way through each wave of attackers and eventually steals one of their machine guns to mow them all down. He breathlessly reports back to headquarters the news of the planned Chinese ambush only to encounter his depressed superiors who tell him of their country's unconditional surrender and the end of the Empire of Japan. Soh doesn't take the news well and shoots up the place in a fit of frustration - though he can withstand his own pain and hardship, it's too much for him to see his entire country brought to its knees. While still in China he comes across several Japanese generals who are trying to persuade a woman named Kiku to make a sacrifice for her country by offering herself to a Chinese officer in order to appease him. Soh rescues her and admonishes his fellow Japanese by telling them that they should stick together and all endure the hardship together. In another scene, he teaches yet another lesson to a train full of his countrymen who did nothing to stop a group of disruptive Koreans. "Where's your pride as Japanese? We lost the war. But don't be such cowards.". 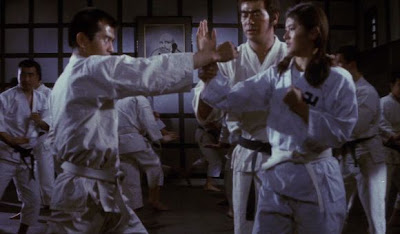 As a title card flashes the year 1946 on the screen, the blaring brass music indicates the confusing and desperate times most of the country is facing. Soh finds himself taking care of a group of orphans in a slum area (overseen by a waving U.S. flag) and once again fights his way through anyone causing injustice. He comes across Kiku again and tries to convince her that a life of prostitution is wrong even though she sees no other alternatives. She believes it suits her well since she is no longer "clean" after being raped by Russians. While the music swells, Soh lectures her on respect and eventually brings her into his "family" of orphans. He has that kind of effect on people. Both Otaki (a drunk who has desperately been searching for his wife since the war ended) and Tomoda (an angry young man who talks of how scorched his country is) are turned around by Soh and eventually become two of his most trusted colleagues. Banished from Osaka by the police to appease the Americans (who want to hang Soh after he cripples one of their G.I.s in a fight), Soh begins to build his school to teach the ancient Chinese martial art of Shao Lin.

"You can't take my soul away as long as I live". Soh's inspirational words build loyal followers as they all try to withstand the continued attempts by the yakuza to run more and more of the country. The film suffers from overdone melodrama in several places (along with the swelling strings, there are also moments of cheesy harmonica music recalling old American westerns), but it's an overall stronger film than the two Yakuza Deka movies. The style and abundance of fight scenes (with a greater emphasis on martial arts style moves) are equivalent, but there's plenty more meat to the story and the characters as well as more symbolic meaning. By referencing the U.S. flag and the remaining American soldiers several times thoughout the film, it's easy to begin to see a different kind of killing machine that can leave huge devastation behind it. Soh himself is the symbol of a country's determination to push through and come out even stronger on the other side.

Read more from Bob Turnbull at his blog.
Posted by Chris MaGee at 8:07 AM

Did you consider trading with the best Bitcoin exchange company - YoBit.

Earn faucet satoshis over at Easy Bitcoin. Up to 33 satoshis every 10 minutes.

Ever try to automate your free satoshi collections by utilizing a BITCOIN FAUCET ROTATOR?