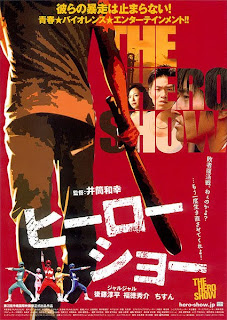 It's not news to any of you that life can be funny, cruel and absurd all at the same time. Bittersweet doesn't do justice to the towering heights and lowest ebbs of our days it seems. Sickly sweet at times, vinegar sour and somedays pretty much shit flavoured might be more apt. It's this rollercoaster journey of moods and circumstances that people tend to try and escape when they go to the movies, but there are more than a few directors who refuse to let us drift into momentary forgetfulness. One film-maker who has decided to combine all aspects of life, crunchy and smooth, into one film is Kazuyuki Izutsu, which makes the end result, "The Hero Show" one of the most divisive films I've seen in a long, long time.

The film begins like so many indie comedies coming out of Japan at the moment -- Yuki (Shusuke Fukutoku) is one of the nation's many freeters, or casual part-time workers, barely eking out an existence on the margins of Japan's crumbling economy. By day he works in a factory grading and packing bananas, and by night he fosters dreams of becoming a famous comedian. He's already deeply in debt after studying to be a manzai comic, so most evenings all he can afford to do is sit in his tiny apartment and tend to his virtual "sister" on his computer. It seems that his only real flesh and blood friend is Takeshi (Ryosuke Sakuragi ), his partner in the now defunct Fujiyama Boys comedy duo. After being unceremoniously fired from his banana-packing job it's Takeshi who gets him a job with a "hero show". These performing troupes tour malls and fairs in Japan re-enacting the screen adventures of tokusatsu heroes like the Super Sentai heroes and Kamen Rider for crowds of children. Donning the leotard and helmet of Red Ranger Yuki becomes part of a group of fellow freeters, wanna-be actors and drop outs which includes Tsutomu (Kosuke Yonehara ) and the button cute hostess of the hero show Miyuki (Ami Ishii). It turns out that Takeshi is dating Miyuki, but that she is also having an affair with Tsutomu. This comes to light and soon the hero show features a real-life fight between Takeshi and Tsutomu that is one of the funniest things to appear in a Japanese film in a long time. 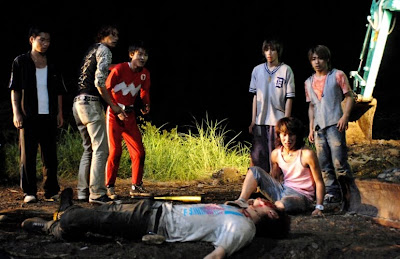 So "The Hero Show" is a comedy, right? Don't be too quick to assume so. In the aftermath of the hilarious smack down between Takeshi and Tsutomu the former decides that the best retaliation is to extort 600,000 yen from Tsutomu to cover his medical bills. To accompliush this he enlists the help of a couple street thugs. After terrorizing Tsutomu and his friends Tsutomu makes the decision to call in a favour from the film's second Yuki (Junpei Goto ), formerly of Japan's Self-Defense Forces who will out muscle the thugs hired by Takeshi. The only problem is he does too good a job of that, and director Izutsu shifts from broad comedy to harsh violence. I caught "The Hero Show" recently at the 11th annual Nippon Connection Japanese Film Festival in Frankfurt. It was a sold out crowd of about 600 people, but by the time Yuki steps in to scare off Takeshi's yakuza thugs the audience shrunk by a quarter. Lulled into the notion that they'sd be watching a comedy the scene in which Self Defense Forces Yuki and his friends beat, kick, pummel with pipes and baseball bats, and eventually brutally murder Takeshi and critically injure one of the thugs. It's a very rough scene to watch and many couldn't stomach it at Nippon Connection. Those of us who braved the rest of the film's formidable 143-minute running time had more surprises in store though. From comedy to cruel violence "The Hero Show" then swung back to comedy, morphed into a buddy movie as the two Yuki's develop a push and pull between mistrust and recognition... then more comedy... then another dash of tragedy.

Brave films, challenging films are what keep movie lovers coming back to theatres, especially when most cinematic products are so formulaic and predictable. Still, the lion's share of audiences like to know what film they are getting into from the beginning and "The Hero Show" simply isn't one of those ilms. I kept thinking again and again about such films as Takashi Miike's "Audition" or Toshiaki Toyoda's "9 Souls" as I made my way through "The Hero Show", but I have to use those two examples conditionally. They were two films that mixed comedy and tragedy, that lulled the audience and then throttled them with violence, but to put "The Hero Show" on the same level as these two contemporary classics would be a mistake. I have a very healthy amount of respect for ay film that can rattle the audience enough to make a large portion of the theatre to clear out, but whatever failings that "The Hero Show" has can't be put entirely down to gratuitous violence. Pacing and a bipolar swing between moods is what prevents "The Hero Show" from being a very, very good film; but having slapstick comedy give way to a seen of grisly brutality that wouldn't look out of place in a Martin Scorsese gangster film is a little too much territory to travel. Scorsese does have humour in his films and frightening violence, but in the case of the blood-letting Scorsese shocks us for 30-seconds maximum with imagery we can't forget (think of Joe Pesci being clubbed and buried alive at the end of "Casino"). Izutsu has his violence drag on for 10-minutes. It's this excessivness, not just with the violence, but with various aspects of the film that bloats "The Hero Show". A few trims and a little taming could have given us a truly great film, but instead we have either a very interesting cinematic experiment or a perfect movie for the masochist in all of us.
Posted by Chris MaGee at 10:45 AM

Searching for the Best Dating Site? Join and find your perfect match.