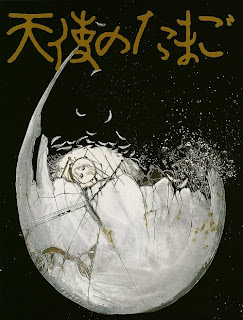 In 1985 Mamoru Oshii was a decade off from international fame with his ground-breaking anime adaptation of Masamune Shirow's manga "Ghost in the Shell". In the early 80's Oshii, then a recent graduate of Tokyo Gakugei University, was working for Studio Pierrot and directing two "Urusei Yatsura" films -- "Only You" and "Beautiful Dreamer". It wasn't until 1984 and his departure from Studio Pierrot for rival Studio Deen that the world got a taste for the heady, intellectually dense kind of material that would eventually form the basis of Oshii's later career. The first indicator of this was "Angel's Egg", a surreal journey by a little girl and a warrior through a drowned and damaged landscape.

Describing "Angel's Egg" is kind of like telling a straight A to B story about an acid trip, or a fever dream, but I'll give it a fighting try. From the first embryonic image of a bird and out of tune strings that mark the opening of the film we in the audience know something is wrong. Cut to a prototypical anime warrior (voiced by Jinpachi Nezu), his cape flapping in the wind like bird's wings and we're off. The warrior witnesses a huge spaceship descending upon a checkerboard desert. With its heavy lidded eye design it looks like a futuristic version of Symbolist artist Odilon Redon's 1878 charcoal drawing "Eye-Balloon". The ship lands and from out of its pupil comes a little albino girl (voiced by Mako Hyodo) who runs through the landscape with a football-sized egg hidden under her dress, distending her abdomen making her appear that she is pregnant. The two eventually meet and find themselves in a cave of giant animal fossils. The warrior does a lot of quoting from Genesis chapter 7, the story of Noah and his Ark and the Flood.... and that's about as far as our basic logic will take us. 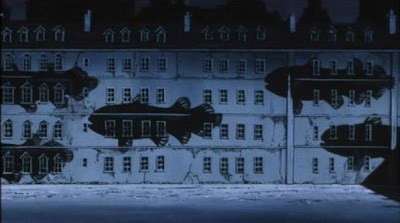 Don't take my mention of lack of logical hand holds in the plot of "Angel's Egg" to mean I didn't like the film. That's not the case. Oshii, who wrote the script in collaboration with anime artist and illustrator Yoshitaka Amano (Final Fantasy, Vampire Hunter D , Sandman: The Dream Hunters), brings a lot of what would make his later films so original -- the equal emphasis on quiet meditative moments as well as the usual action sequences of so many anime, the duo of an older, experienced male and a youthful female, repeated references to religion and philosophy (often with characters spouting quotes from texts) and of course a grand mystery, one that opens onto questions of reality and our place in it. The ending even prefigures the opening credits of Oshii's "Ghost in the Shell". All is here in "Angel's Egg" along with some gorgeous surreal imagery such as throngs of mysterious fishermen running through abandoned streets hefting harpoons. The only thing is that the giant ceolocanths they're hunting are literally just shadows on the pavement of their ghost city. Had this been a live-action film these sequences, along with the little albino heroine of "Angel's Egg", wouldn't have looked out of place in the filmography of Alejandro Jodorowsky or "Creemaster" artist Matthew Barney. There is a problem in all the weirdness though.

There is an abundance of strange and puzzling beauty in the film, no doubt, but its the unwelcome onslaught of pseudo-Christian symbolism that gets wedged into the story that prevented me from fully losing myself in it. The warrior carries a crossbow that looks more like a crucifix, and the palms of his hands are bandaged as if covering stigmata. He and the little girl end up in the belly of what appears to be a giant whale like in the famous story of Jonah. Flood imagery present throughout, backed up by the warriors quotes from The Book of Genesis. There's nothing like a certain amount of religious imagery in a film like "Angel's Egg", but very quickly it feels like Oshii is going for straight symbolism rather than surrealism. Surrealism allows for the imagination to leap from one interpretation to another, one sensation to another, while symbolism, like that in "Angel's Egg", imparts that there may very well be only one possible interpretation to these amassed Biblical nods. It turns the film from a wonderful dream to just a clever riddle.

It's good that the animation, filled with texture of shadow, the young girl's ever flowing snow white hair, ripples on water, and the character design (courtesy of Yoshitaka Amano) all brings a beauty that can offset the clumsy symbolism. In the end "Angel's Egg" is anime as heavy-handed art film, but one that gives us insights into the creative mind of one of today's most accomplished Japanese animators.
Posted by Chris MaGee at 6:53 AM

If you're looking for the most recommended bitcoin exchanger, then you should use CoinMama.

Claim faucet bitcoins over at Easy Bitcoin Faucet. Up to 33 satoshis every 10 minutes.

It’s actually a nice and useful piece of information.
I am glad that you simply shared this helpful information with us.
Please stay us up to date like this. Thanks for sharing.
스포츠토토

What’s up, yes this paragraph is really good and I have learned lot of things from it concerning blogging.
성인웹툰

Hi everyone, it’s my first go to see at this web page, and paragraph,
I am very satisfied with visiting here. Thank you for good content. And please visit my website as well.
토토사이트