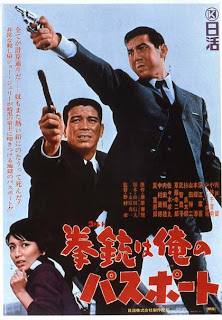 A Colt is My Passport was made as a B-movie. It’s quite obvious it had budgetary constraints. Rivers of blood had been flowing for years on celluloid in Japan by 1967, but it’s remarkably absent in a film about gangsters and assassins. It was shot on black and white film, 14 years after colour film was introduced to Japan . These weren’t creative choices. It had cast in its lead popular tough guy actor Jo Shishido, who would also star in Branded to Kill and Slaughter Gun that same year. It would end up being one of his favourite films, particularly because, up until 1967, he had usually played bad guys. That was his shtick. But he got several roles as a heroic lead that year, and Colt was the first. His sidekick was played by Jerry Fujio, a popular singer who actually performs a song in the film. Nikkatsu churned out its borderless “Action Cinema” like a machine, using the same stars, playing variations of the same role, in eerily similar films. It was at times genius in its re-imagining and re-inventing of Western cinema genres and motifs. It was also a sign of other Asian genre bending trends that would sprout up decades later.
Jo Shishido plays a hitman hired by a gangland boss to knock off his rival. He agrees, and, along with his sidekick played by Fujio, performs the task with precision and efficiency. Unfortunately, they’re double-crossed by the very man who hired them, but Shishido’s quick thinking leads to their escape. After a failed escape attempt, Shishido manages to smuggle out Fujio, staying behind to confront the boss and his gang for the climactic showdown. The story is simple, the dialogue is minimal, and the action is sparse. Narratively, and to some degree cinematically, the film owes a lot not just to the French New Wave, but Jean-Pierre Melville in particular. It echoes his tragic, minimalist film noirs. Shishido himself seems to embody the “cool” that Jean Paul Belmondo and Alain Delon captured so well on screen. This influence seems to precede what would come later with John Woo’s The Killer and a slew of other Hong Kong heroic bloodshed films. And while director Takashi Nomura didn’t depict the tragic elements quite so extreme as Melville or Woo, all three of them did channel the same ideals into their protagonist: a man who follows his own strict code, whether or not it brings about his own death, who at the same time manages to ooze “cool” through every fiber of his being. These men would never crack, and would never break. They would always maintain that air of confidence and panache. The completely random musical performance by Jerry Fujio evokes images of Elvis Presley, someone who heavily influenced the first generation of Nikkatsu Action films in the late 1950’s. The score obviously has roots in Spaghetti westerns, but, cinematically, so does much of the film. 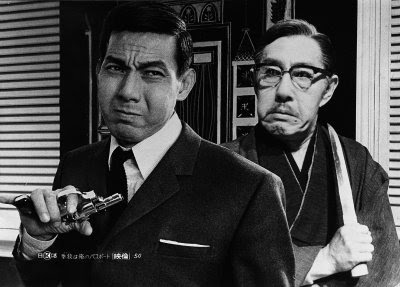 The fusion of these influences is epitomized wonderfully in the final shoot-out. Shishido takes on a small army of Yakuza goons at a dusty reclamation area. The scene is reminiscent of many Leone films, both in its expansive, desert-like location and its treatment of its lone gunman protagonist. And after the dust settles, and Shishido remains the last man standing, he manages to end in a pose that radiates such flair that one can’t help but be awed by its beauty. And that’s what A Colt is My Passport is: a beautiful film. Despite the limitations under which the film was made, it channels the French New wave, the American gangster film, the Spaghetti western and even a little Elvis into becoming a completely original and inspiring film, that embodies everything that is great about cinema. It is entertaining, compelling, and visually striking. It is the perfect embodiment of Nikkatsu’s borderless style.
Read more by Matthew Hardstaff at his blog.
Posted by Chris MaGee at 10:00 AM