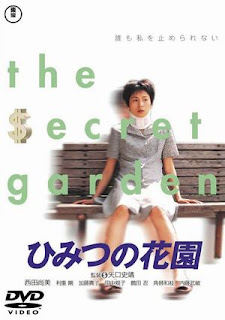 “My Secret Cache" is the story of Sakiko - a young woman whose single overriding obsession is money. Not for making a better life for her and her family or even just for buying things. Just the simple acquisition of money.

As a young girl, she grows up in a middle class home and is neither rich nor poor. She ends up with few friends as she is really only happy when counting money and eventually gets a job at a bank. But even there she derives little satisfaction as all the money belongs to other people...She seems destined to slouch through the rest of her days (she admits she likes to do nothing) until one day the bank is robbed and she is taken hostage. The thieves end up crashing their getaway car and Sakiko is the sole survivor though she ends up losing the loot in an underground cavern. Upon returning to work, she decides that she now has a purpose in life and a direction to follow - whatever will help her find that money.

And she pursues this with single-minded selfish determination. She moves out of her home with her parents and sister, enrolls in Geology classes and learns to swim, scuba dive and rock climb. She becomes quite proficient at all these things, but simply as tools to get to her end goal. Even the relationships she retains (her family, the young professor) are really only consequential to her when they are required for her purposes. And this becomes a bit of a sticking point in the movie...Sakiko isn't a sympathetic character. I have to admit I occasionally found myself rooting against her. 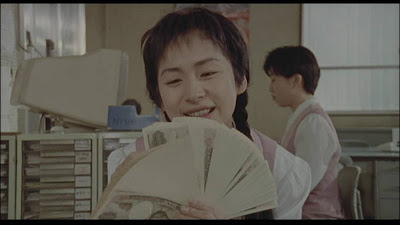 Unlikeable characters are fine (especially in comedies), but they usually have to also have at least some interesting traits in order for you to care about the screen time they are getting. Unlike someone like Max from Wes Anderson's "Rushmore" (not exactly someone you can easily warm to, but a character I always found interesting - if only in how he would handle situations), Sakiko just isn't worth paying a great deal of attention to. But the concept of the film is at least intriguing...In order to have meaning in your life, you need a goal - a goal that will enable you to do a number of things while you are in pursuit of it. This doesn't necessarily help Sakiko enjoy those things she accomplishes during her journey, but at least she now has a reason to live.

Irish jig music throughout the film really helps to set an appropriate tone - if only to create baffled amusement to the viewer as they wonder "why is there so much Uilleann Pipe music in this movie?" The comedy is mostly deadpan in style and also includes some black humour, but it's a mixed bag. There are indeed some good moments provided via Sakiko's exploits and through some of the supporting characters, but there are also several scenes that, through poor pacing and editing, lose some of the steam of the film. It's enjoyable for the most part, but just never builds to any sustained heights.

Read more from Bob Turnbull at his blog.
Posted by Chris MaGee at 8:19 PM