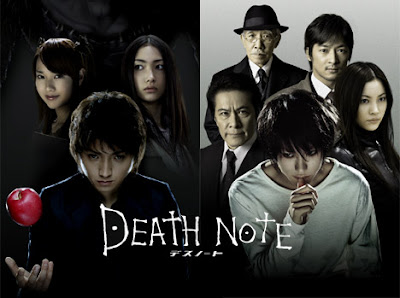 Canadian fans of anime, manga and of course Japanese films should be very happy about this news: Viz Pictures is running a one night theatrical release of "Death Note", the 2006 Shusuke Kaneko directed big screen adaptation of the blockbuster supernatural manga by Tsugumi Ôba and Takeshi Obata on September 15th.

60 participating Cineplex theatres will screen the film at 9:00 p.m. local time. Advance tickets are being sold here either individually or bundled with a Viz Pictures "Death Note" DVD for $29.99 Canadian. A movie and a DVD for 30 buck? Not half bad... Plus people attending the screening will not only get to see an exclusive interview featurette with Shusuke Kaneko before the film.

All this "Death Note" mania comes on the eve of the September 16th DVD release from Viz Pictures.

Thanks to Mika Anami at Viz Pictures for the details on this... and make sure to check back for more details on the thatrical run of "Death Note" here at the Pow-Wow blog.