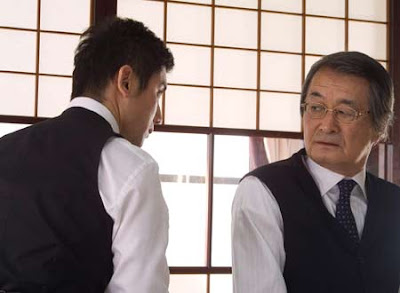 As we reported at the beginning of the month "Okuribito", the story of an out of work cellist (Masahiro Motoki) who returns to his hometown to work in a funeral home, already picked up the Grand prix des Americas, the top prize at the this year's Montreal World Film Festival.

The last time that Japan had a film nominated for Best Foreign Language Film at the Oscars was in 2003 with Yoji Yamada's "Twlight Samurai". The last time that a Japanese film actually took home an award was in 1955 when Hiroshi Inagaki's film Miyamoto Musashi picked up an Honourary Foreign Language Film Award. We'll see if Japan's luck changes when the official Academy Award nominees are announced in mid-January.
Posted by Chris MaGee at 1:41 PM