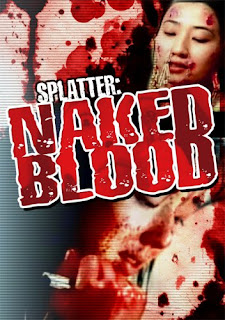 In 1874 English researcher C. R. Wright boiled morphine and acetic anhydride thus synthesizing a compound he named diacetylmorphine. 21 years later Heinrich Dreser, a chemist working for Bayer Pharmaceuticals in Germany followed up on Wright’s discovery and was thrilled to see what he had on his hands; an amazing medical breakthrough that would “kill all pain and anger and bring relief to every sorrow,” plus it was believed to be free of the crippling dependency that developed with the use of other opiates. Bayer patented diacetylmorphine and released it in 1898 as a cure-all for everything from colds to tuberculosis. Oh, and Bayer knew that diacetylmorphine wouldn’t trip off doctor’s and patient’s tongues so they gave their new drug a catchy new name: heroin.

Why am I relating the story of the entirely well-intentioned but wholly misguided creation of one of the most dangerous and highly-addictive drugs in history? Because Hisayasu Sato and screenwriter Taketoshi Watari chronicle the equally well-intentioned creation of a miracle painkiller that turns out being far, far more nightmarish than heroin in their 1995 V-cinema film “Splatter: Naked Blood”.

17-year-old child prodigy Eiji (played by comedian Sadao Abe in his very first role) is eager to continue in his father’s footsteps. Dr. Kure was a brilliant scientist whose research into immortality led to his mysterious disappearance a few months before Eiji was born. The younger Kure believes he has found, if not true immortality then at least career immortality as the creator of a new painkiller that will give its users a feeling of “calm oceans and blue skies”. Only two things stand in the way of completion. First, a name and in a nod to the Kure family lineage he dubs his new drug MY SON. Secondly, the drug must be tested and this is where Eiji suffers a terrible lapse in judgment. His mother Yuki, a respected scientist as well, is in the final stages of testing her own drug, a new contraceptive agent that may ease global overpopulation. She has enlisted three female subjects to participate in its final clinical tests, but unbeknownst to Yuki her son has injected MY SON in the women’s IVs. Eiji estimates that it will take no longer than 48 hours it to take full effect so he sets about secretly videotaping these three women as part of his own drug trial test. 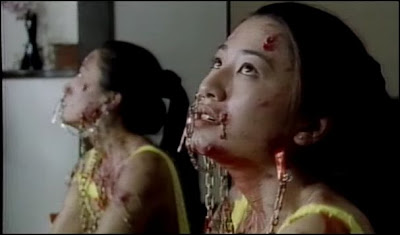 In one of his stand up routines Bill Cosby tells the audience that someone once explained to him that cocaine intensifies your personality. “Yes, but what if you’re an asshole?” was the punch line. Now, none of these women are assholes, but they each have their own peculiar quirks. One’s greatest pleasure is feasting on delicious food, while another would rather starve to death than to get fat and stop being beautiful. The third test subject, Rika (Misa Aika), well, Rika is unique. An insomniac since puberty she is constantly fatigued, highly sensitive to sound and disdainful of other living creatures. Except for a large cactus which she hooks up to a virtual reality device that allows her something like sleep she lives in total isolation. How will Eiji’s drug affect these three very different women? He soon finds out, forced to watch helplessly as each woman’s personal obsessions are intensified to their nauseating conclusions. The woman who admires beauty above all else begins inflicting horrifying body piercings, while the woman with a fixation on food is compelled to sample the most delicious food of all: herself. All through these gruesome mutilations the women moan and sigh, MY SON having replaced severe pain with intense pleasure. But Rika, whom Eiji begins a relationship with, seems immune to MY SON’s effects… or is she?

While “Splatter: Naked Blood” sits firmly in the gore genre it’s the artistry that Sato brings to the less bloody scenes that elevates the film above its contemporaries. The oppressive mood created with long, near silent scenes, the repeated shots of Rika’s cactus, an object that bristles with the promise of pain, the jewel-like blue of MY SON that is mirrored in various dream sequences and through the view finder of Eiji’s camera; all these are used to increase the impact of what, at it’s heart, is a classic Frankensteinian scenario. Despite the beauty of its form some of the truly stomach churning content in “Splatter: Naked Blood” may have me waiting a very long time before I watch it again.
Posted by Chris MaGee at 5:08 AM