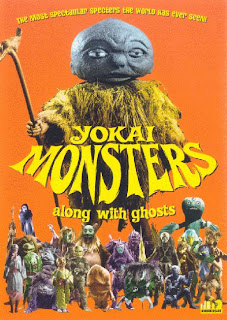 A bit of advice: if you ever find yourself in a situation where a grizzled old man pleads with you not to do something (say for example walking through a certain part of a forest or taunting dormant spirits), DON'T DO IT! Seriously.

Of course, if you are watching a situation such as this unfold on screen, you absolutely want the people in question to ignore the advice - because you know something is gonna happen to those non-believers...Such a case as this is found in 1969's "Yokai Monsters: Along With Ghosts", the third film in the trilogy of fun monster films based around the supernatural spirits found in Japanese folk tales. 7 year-old Miyo is in search of her father, but is also running away from gang members who believe she has accidentally come across and has possession of an incriminating document against their gang. As they pursue her, they come across...wait for it...a white haired man who warns them not to use their weapons through a certain section of the woods. If they do, they run the risk of angering the Yokai and receiving personal visits from them. I'm sure you can guess whether or not they decided to heed the old man's advice. 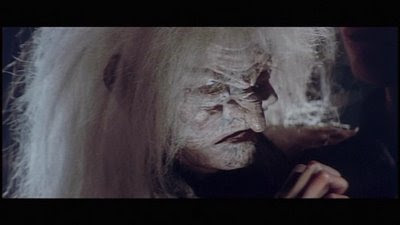 The old man just happens to be Miyo's grandfather and he has given her, along with a pair of dice that hold some mysterious meaning, instructions on how to find her father. With the gang chasing her, she befriends a slightly older boy and others who help her at various stages to get away and towards her end goal of the village where her Dad may still be. The characters, performances and plot points are all very well constructed - this isn't a shell of a story outline used only to support the set pieces of ghoulish appearances and attacks. Directors Yoshiyuki Kuroda and Kumiyoshi Yasuda (each credited as sole director on a previous Yokai Monster film) don't overdo the monster sightings which allows the story to really be front and centre. Though that's never really a bad thing, it is slightly disappointing in this case because the monsters themselves are such fun creations.You really want to see more of them in all their glorious non-CGI states. The special effects range from effectively cheap (meaning that sometimes a simple papier-mache mask and costume can do wonders) to slightly cheesy.

As mentioned in the previous review of "100 Monsters", all three of these late 60s Yokai Monster films are available in a single low priced 3 disc set from ADV Films. It should be easily available from major online DVD vendors.

Read more from Bob Turnbull at his blog.
Posted by Chris MaGee at 4:50 AM

You've now convinced me to get this set, Bob. C.M.