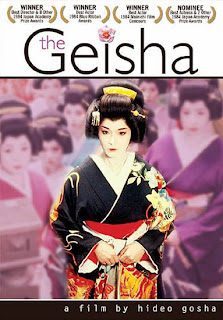 When you hear the word "geisha" what comes to mind? For most people the word conjures up visions of poised and genteel women wrapped in elaborate kimono with their hair styled into the traditional peach-shaped coif. "Living works of art", tea ceremonies, flower dances. Meanwhile some fans of classic Japanese cinema might remember the more down to earth, even down trodden, depiction of geisha in films like Kenji Mizoguchi's "Sisters of Gion" or Mikio Naruse's "Late Chrysanthemums". So, on one hand you have the Japan National Tourist Organization sanctioned picture postcard view and on the other hand one filled with mono no aware, "the sensitivity of things" in which these beautiful women can't escape the sadness and disappointment of life. Well, there is another option in terms of geisha in Japanese cinema. In Hideo Gosha's 1983 "The Geisha (Yokiro)" these "flowers of Japan" drink, do the Charleston, fight like sailors and most importantly, and to the disapproval of geisha historians and purists, have sex with their clients. Gosha's depiction is obviously a break with tradition, but one that garnered "The Geisha" an impressive nine awards at the 1984 Japanese Academy Awards and forms the basis of a very entertaining if a bit over long and at times convoluted film.

In 1933 the Yokiro isn't just one of the most famed geisha houses in Kochi Prefecture, but in all of Japan. Of the 200 geisha that its mama-san Osode (Mitsuko Baisho) employ one stands out. 20-year-old Momowaka (Kimiko Ikegami) excels at dance, playing the shamisen and traditional joruri and she's breathtakingly beautiful, and it's this beauty that has many of the men who frequent the Yokiro vying to become her patron and lover. Osode has one wealthy but elderly man in mind and pressures her top geisha to sleep with him, but Momowaka has her heart set on the handsome young gentleman who it also turns out is the father to her unborn baby. Momowaka's life would be complicated enough as it is, but Kôji Takada's script, based on a novel by Tomiko Miyao, throws a lot more into the mix to make things even harder for this poor girl. 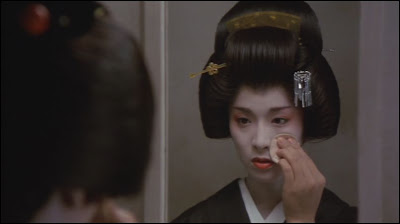 We meet Momowaka's father, Katsuzo (played by the ultra-cool Ken Ogata) who has never gotten over the murder of Momokawa's mother, a geisha named Otsuru, by Osaka gangsters two decades earlier. He shows up at the Yokiro with Tamako (Atsuko Asano), a brash and nubile young woman who has the disturbing habit of referring to Katsuzo as "Daddy", but the name's far from the truth. Katsuzo's a pimp and regardless of how eager Tamako is to try "the geisha thing" as she puts it he's there to sell her to Osode for the best price he can get... the exact same thing he did to Momowaka when she was only 12-years-old. Obviously Momowaka is a little bit conflicted to see Dad after that, and Tamako instantly sets her on edge.

The plot twists and sub-plots don't end there though. It turns out that Osode is Katsuzo's old lover. Katsuzo also sells an Osaka housewife to the Yokiro which results in her having an affair with Osode's husband. Tamako leaves the Yokiro after a monumental cat fight with Momowaka, heads to Osaka, joins a brothel from which Katsuzo saves her from which pisses off the Osaka yakuza. Oh, and then Momowaka falls ill with tuberculosis. And Tetsuro Tanba shows up briefly (which is always a plus), but we're never sure why. You'd be forgiven if you're getting a bit confused.

If there's one failing of Gosha's film is that there's at least three film's worth of story packed into its already lengthy 144 minute run time. Thankfully Gosha and his cinematographer Fujio Morita make it very easy to sit through the repeated viewings that "The Geisha" demands. This is a truly gorgeous film with scenes like Momowaka battered from her fight with Tamako climbing onto a lit bar and making love with her young suitor while cranking an old phonograph staying with me for several days after seeing it. It the sheer beauty of the film combined with Gosha's wonderful sense of effect and drama that saves "The Geisha" from being just another muddled, drawn out epic. If you're a fan of Gosha's "Goyokin", "Tenchu (Hitokiri)" or "The Wolves" then don't let "The Geisha's" dense plotline(s) deter you. Definitely give it a look.
Posted by Chris MaGee at 3:39 PM

A sad thing in life is gw2 gold when you meet guildwars2 credits someone who means a lot to you，only to find out in the end that it was never meant to be and you just guild wars 2 gold have to let go.

The best kind of friend is gw2 gold the kind you can sit on a porch guild wars 2 gold swing with，never say a word，and then walk away feeling guild wars 2 gold like it was the best conversation you've ever had.