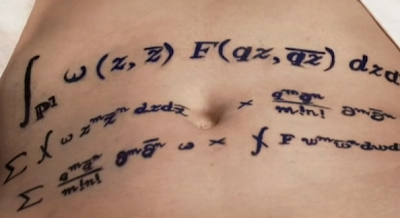 I took a little bit of a double take when I read this post over at Twitch today. First I just saw a news item on what look to be a fascinating and somewhat erotic short film titled "The Rites of Love and Math". The style of this 26-minute short film is an homage to author Yukio Mishima's single directorial effort, 1966's "Patriotism", but its story isn't of militarism and seppuku, but of passion and mathematics. The film follows the last night spent between two lovers- a brilliant mathematician and his Japanese lover, Mariko. Wanting to impart more to Mariko than just a memory of a night of lovemaking the mathematician tattoos an equation onto her skin. The trailer for the film is visually stunning and NSFW so check it out below when you're not at the office, but that's not what made me do a double take. What did was the realization that one of the directors of "The Rites of Love and Math" is a long-time reader of the Toronto J-Film Pow-Wow!

French experimental filmmaker Reine Graves and I have corresponded off and on over the past couple years via Facebook, but when she said she was working on a film with University of California-Berkeley mathematician Edward Frenkel I never put two and two together. Now the fruit of their creative collaboration is screening at this year's Sitges International Fantastic Film Festival, and I can't help feeling very proud for Graves and Frenkl. And seeing that Graves is an avowed fan of Japanese cinema I also can't help but hope that we at the Pow-Wow played even a small part in the inspiration of this project.

Congratulations to Graves and Prof. Frenkl! Here's hoping that "The Rites of Love and Math" is seen by audiences worldwide!

Guess I was on to something. I wrote my previous comment without reading your sentence pointing out that it was indeed an homage to "Patriotism."

I've recently been reading Mishima and reading about his life. Thus I've just watched "The Rite of Love and Death."

How would I go about seeing this short film (I live near Osaka, by the way)?