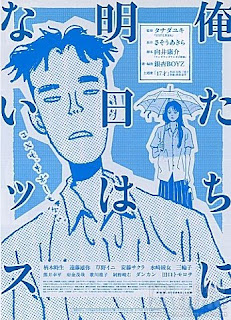 I've often used the analogy of a toddler being put behind the wheel of a car to describe adolescence. With a tank full of gas the car is ready to drive the toddler from A to B, but even if the child's feet could touch the pedals you're most looking at a serious accident. It's the same when you're a teenager. While your body is sexually mature and you're brain is flooded with hormones you're still an innocent kid and the chances of disaster, emotional or physical, are certainly better than 50/50. Those first teenage stirrings and experiments with sexuality stay with us for the rest of our lives, so obviously they've been used as creative fodder for a fair share of films. It's been rare that one manages to properly capture that conflicted but exhilarating period though. For every film like Jason Reitman's "Juno", Larry Clark's "Kids", or Catherine Hardwicke's "Thirteen" you have a dozen "American Pies" and "Porkys", and that's just in Hollywood. The Japanese film industry churns out one syrupy teen oriented dorama after another, so it's so refreshing to see a film like Yuki Tanada's "Ain't No Tomorrows" come along.

Based on three chapters, "Romansu", "Yure te imasu", and "Oshiete kudasai", from Akira Saso's award-winning manga "Oretachi ni Asu wa Naissu", the film moves between three separate storylines set at the same Tokyo area high school. First there is the story of Mine (Yuya Endo), a handsome, serious boy who one day after school discovers his classmate Chizu (Sakura Ando) passed out on the school lawn and bleeding from between her legs. What he, and she once she comes to, thinks must have been a rape turns out to only be Chizu's first period, something that Chizu's single-father (played by Takeshi Kitano regular Dankan) never seems to have gotten around to telling her about. It isn't just menstruation that Chizu is ignorant of, and soon Chizu and Mine strike up a friendship based on Mine's seemingly indepth knowledge of sexual intercourse. I say seemingly because when asked to tell her about sex he takes Chizu to a seedy theatre that shows pinku eiga, not something that someone who knows much about sex would actually do. The film piques her interest, but when Mine refuses to help her lose her virginity their friendship becomes much more complicated. 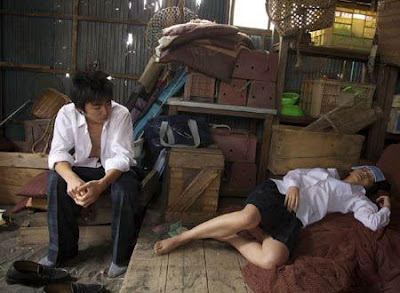 Unlike Chizu, Tomono (Miwako) isn't in a hurry to have sex with her young boyfriend Hiruma (Tokio Emoto). Well, to call him her boyfriend my be overstating the situation a bit. Hiruma is the school's class clown and when he's not asking innuendo laden questions in class he's continually nagging Tomono to have sex with him, but the sickly Tomoko would rather go on trips to the beach than trips to the bedroom. Their situation is further complicated by Tomono's relationship with her home-room teacher, Yoshida (Tomorowo Taguchi) whose feelings for her go well beyond what is appropriate. Hiruma doesn't just find himself chasing after an unattainable girl, but he also must deal with his feelings of betrayal and disgust with Yoshida.

Lastly there's Ando (Ini Kusano), a kindly, overweight boy who Hiruma and Mine have nicknamed Oppai or "Boobs" for his fleshy chest which they regularly pay 100 yen to fondle, it being the closest to actual female breasts that any of them have come close to. Of course Ando is embarrassed by this and spends most of his time at the local market babysitting the owner's toddler-aged son. It's his natural gift for taking care of children that attracts the attention of the beautiful Akie (Ayame Misaki), known around the school as the girl with the biggest breasts. She empathizes with Ando for being different, for being picked on for having big breasts, and soon the two form the most unlikely pairing in the film... that is until the real reason for Akie's attraction to Ando comes to light.

Even in the age the sensitive teen sex comedies pioneered by Hollywood writer/ director/ producer Judd Apatow, a film like "Ain't No Tomorrows" could easily go down the road of boobs, beers and cheap laughs, but not when you have Yuki Tanada, director the the superb 2005 comedy/ drama "Moon and Cherry" at the helm and Kosuke Mukai, the man who not only scripted the crowd-pleasing comedy "Linda, Linda, Linda", but also adapted Akira Saso's manga "Shindo (Prodigy)" to the screen. Both present the teens in the film as fully rounded human beings, not just walking libidos... although they're that too. Yes, the boys can still be breathtakingly insensitive, and yes, the girls can still be shockingly self-centered and cruel to each other (they're teenagers after all), but Tanada and Mukai also show their other sides as well. The girls are hardly passive, have quick wits and don't walk around dressed like hookers. For their part the boys share an honest comraderee amongst themselves and moments of real sensitivity when dealing with the girls, especially chubby Ando. I couldn't tell you how touched I was seeing him slowly fall for Akie. Their scenes together really brought back memories of me when I was a teenager: fat, unattractive, in some ways much older than I really was, but in other ways very immature. Then again that's the key to "Ain't No Tomorrows" success, or any great teen movie for that matter. When we can recognize ourselves in these young characters then the job of the filmmaker has truly been accomplished.
Posted by Chris MaGee at 4:51 PM