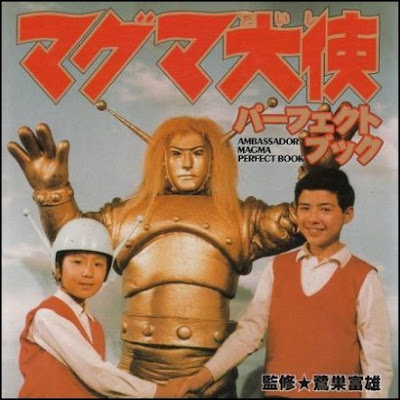 Earlier this week we reported on the new Akira Kurosawa Digital Archive that's been compiled by Kyoto's Ryukoku University in conjunction with Kurosawa Productions. So comprehensive are the materials that have been scanned and posted that it could easily take days to dig through it all. So, if you didn't have enough trouble coming up with time to navigate the Kurosawa Archive I've now found another site that will take even more of your time to explore; although this site doesn't so much have a feeling of a museum as the Kurosawa site does. No, this one is more like the biggest, best garage sale you'll ever find.

Okay to call this a website is a bit of a misnomer. It's actually just a Picasa Web Album that's been set up by a user in Japan who calls himself "Mack". "Mack" collects stuff, lots and lots, and lots of stuff, from toy model box tops and military magazine to old 1960's Japanese pop albums, but of special interest to Japanese film fans (and film fans in general) is his extensive collection of Japanese movie memorabilia. Not only does he have a plethora of scans of Godzilla, Gargantua and other kaiju magazines and posters, Ultraman and Ambassador Manga (above) pics, posters for Takeshi Kitano films, etc., etc., etc. but he also has an extensive collection of Japanese posters for such Hollywood movies as "Easy Rider", "Ghostbusters", "The Ten Commandments, "Planet of the Apes" as well as old Japanese movie magazines dedicated to Bruce Lee and American Westerns. It just goes on forever and ever. So if you have some time to kill after going through the Kurosawa archive then make this site your next stop.
Posted by Chris MaGee at 3:45 PM