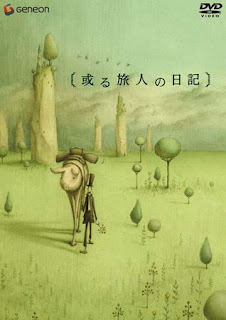 After Kunio Kato picked the Best Animated Short Film Oscar at this year's Academy Awards in February everyone seemed to be talking about him. Sadly, this was mostly due to his brief, sincere and funny acceptance speech in which he thanked his production company, Robot, with his now famous and frequently YouTube lampooned "Domo arigato, Mr. Roboto". Since then the internet's 2-second attention span has already moved on to "Britain's Got Talent" star Susan Boyle (actually people are already done with her too). For everyone who learned the name Kunio Kato that night probably only a small percentage actually made the effort to actually see his beautifully crafted and touching "La Maison en Petits Cubes", the story of an old man forced to continually build onto the foundations of his house in order to keep it above the rising level of the sea that surrounds it. Most who did get to see it fell in love with it or at least admired it (I fell into the latter category), but amongst that small percentage of people who sought out "Cubes" there was an even small percentage of people who dug further to seek out more of Kato's work. It's a shame because all you who lost interest after "Domo arigato, Mr. Roboto" are missing out on some highly original and inspiring work... not "La Maison en Petit Cubes" (although that film was both original and inspiring), but Kato's series of short films that go under the collective title of "Aru Tabibito no Nikki", or as it's known in English "The Diary of Tortov Roddle".

Made up of seven shorts ranging in length from just 2.5-minutes to 5-minutes the films follow the continuing journey of the titular Tortov Roddle, a pencil thin gentleman whose scarf, top hat which makes him as instantly as recognizable as any classic story book character... that and the pig with equally long, pencil-thin legs on which he rides. To where it's never really explained in detail. At one point the inter-title cards that frame the action and give voice to Tortov mention that he's setting off on the "north plains" and that he's looking for an inn to stay at, but in terms of any kind of hard plot that's about it, but plot isn't what "The Diary of Tortov Roddle" is all about. It's about the nighttime and an unfamiliar land. It's about a world in which dreams have usurped reality and it's about just plain child-like wonder. 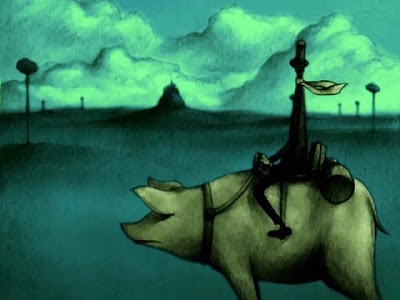 From the very first of Tortov's adventures, titled "The City of Light" in which he observes cities built on the backs of giant frogs, Kato takes us to places that for me I didn't think were possible anymore; and I don't mean cities built on the backs of frogs, or bipedal rabbits who take streetcars to the moon, or a goldfish that comes to life out of a spiral of cream in a coffee cup, or a town that has nightly movie screenings on the back of a giant bear, although those are all here to enjoy. What I mean is that the feeling of slack-jawed wonder and awe that I felt while spending the short 22-minutes that it takes to watch all seven episodes of "Tortov Roddle". Inhabiting this serene, turquoise-tinged world was like a trip back in time to when I could still be fascinated by the unexplored corners of my parent's backyard, picture books of monsters and heroes, and the curves and folds of the blanket on my bed which in the glow of my night light resembled the geography of an unknown land... and unknown land very much like that in "The Diary of Tortov Roddle".

There's a lot of talk about which Japanese animator will take up the title of "The Next Miyazaki". Of course Makoto Shinkai and his lushly illustrated, but often saccharine films "Voices of a Distant Star" and "5 Centimetres per Second" usually get the brunt of this talk, but for my money I have to say that with the ability to evoke the kind of magic that he does in "The Diary of Tortov Roddle" that Kunio Kato will ultimately be the animator to wear this coveted crown... and this is coming from a die hard Miyazaki fan. No, Kato's style doesn't evoke the traditional Osamu Tezuka-based "anime" from which Hayao Miyazaki sprung. It's renderings are polished, but rudimentary. Unnecessary details are left out and there's nary a doe-eyed high school girl in sight, but (and I hope this doesn't sound intentionally cryptic) sometimes you have to go outside what you would normally classify as "anime" to discover "Japanese animation".

For all of you who got tired of watching Kato online delivering his Oscar acceptance speech in broken English and moved onto other viral videos you'll be pleased to know that "The Diary of Tortov Roddle" is widely available on YouTube and at Crunchyroll, so I'm urging all of you to seek it out... even this weekend... and hopefully it will have the same magical effect on you as it had on me.
Posted by Chris MaGee at 4:21 PM

Interesting. Do you really think that Kato's style of storytelling could sustain a feature length film? Or that his character design would have such a commercial appear like the wide-eyed characters of Miyazaki? Call me selfish, but I hope that Kato keeps it small. I see him as following in the footsteps of Koji Yamamura. Short, but brilliant, films. ;)

That's a good question about whether he could carry a feature film. I'm not sure. When I say he has the potential to be the next Miyazaki it's because of the way he can evoke a sense of wonder... somethign very rare, and something Miyazaki can do as well. I don't think Kato's animation style would be a hindrance in a feature film. There have been so many animated films lately that don't feature the prescribed Disney/ Pixar/ Studio Ghibli style (ie: Waltz with Bashir, Persepolis, $9.99). I think audiences could get into it. he key would be the story though. For now I, like you, am happy if he keeps producing his lovely short films... but in the future you never know...