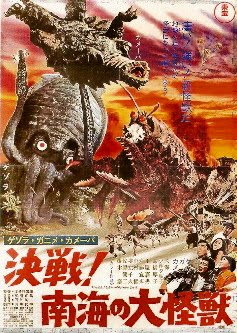 When you're dealing with a film called "The Space Amoeba" (aka "Yog: The Monster From Space"), you should probably know going into it that you might have to suspend your disbelief at times. Which, of course, is OK. Just because a film doesn't follow the exact letter of all physical laws or have people react exactly as you expect they should, doesn't mean that there's an issue with it. As long as the movie remains consistent with the world in which it has set itself and its characters remain true to themselves, then everything is fine. Within the first few scenes of "The Space Amoeba", you realize you don't have to watch for any sort of consistency in whether the film stays true to its environment - it's making it up as it goes. However, that's perfectly fine in my book because in this case, the film stays true to itself.

As a monster movie made for entertainment, it hits on both those counts extremely well. Director Ishiro Honda (of the original "Gojira") keeps the pace of the film in high gear all the way through and isn't afraid to show you his monsters in all their glory - and frequently at that. Though there are a few supremely cheesy special effects in the film (including a frame by frame hand drawn tentacle in one short scene), the monsters are terrific. Yes, occasionally they're just guys in monster suits, but it all comes across really well because of the imagination put into the costumes (the DVD comes with short little documentary features on each of the three main animals on which the monsters are based) and Honda's ability to overlay them with the smaller human characters. Part of the fun is in actually being in on the joke of the monster suits, but the rest comes when the sharp piercing scream and squeals of these beings ring out and you briefly forget. 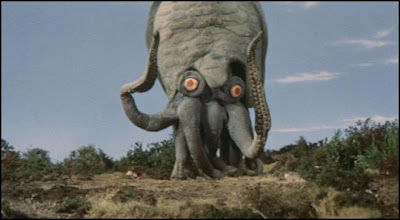 The plot goes something like this: The unmanned space probe Helios 7 is on its way to Jupiter when it encounters what appears to be some blue space dust. This foreign substance enters the ship (even though it is completely vacuum sealed) and simply wills the ship to turn around and head back to Earth. We cut to Kudo, a photographer returning to Japan from Brazil, who is reading about the probe having simply disappeared. He begins to ruminate about how life would be off the planet Earth, when he looks out the window and sees Helios 7 falling back into the sea. Though he fails to capture any pictures of the splashdown, he somehow manages to mark the exact spot (with a red 'X') on his small map. This happens to correspond exactly with the location of a small uncivilized (and inhabited by only 80 people) island called Selgio that several developers are hoping to build up as a new resort destination. They ask Kudo to come along with them and take photos of the island. Along for the trip is Dr. Miya (an old friend of Kudo's), a woman developer and a Corporate spy. Once on the island they discover that the islanders fear a large creature called Gezora. With the help of the blue space amoeba, Gezora is now gigantic and its squid-like tentacles cause havoc - especially when it walks on land. That's really all you need to know, but let's just say that the amoeba also finds its way to a crab and a turtle.

The residents of the island are mistrusting of the Japanese (the elders insist the younger ones don't deal with those "devils"), but they can all speak the language due the island having been occupied and used during the war. As with "Gojira", Honda can take the simple "monster movie made for entertainment" and still work in a few fairly subtle messages. The Japanese who have come to the island to "civilize" it (ie. to exploit and profit from it) gradually realize that to achieve their goal, they need to actually work with nature instead of against it. So perhaps we didn't have to suspend all of our disbelief after all.

Read more from Bob Turnbull at his blog.
Posted by Chris MaGee at 4:59 PM