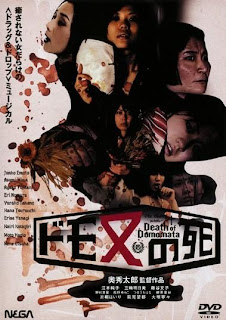 Is it just me or are there very few artistically ambitious films being made these days? Yes, there are a surplus of technically ambitious, special effects driven films released in various countries each year, and there are a handful of films that feature ambitious and daring performances, but in the end film is more of a business than an art, so narrative and artistic innovation more often than not ae forced to concede to marketability. It wasn’t always this way. The Golden Age of personal, daring, and sometimes confounding filmmaking came out of the political, social and sexual experimentation of the 1960’s and by the end of that decade Japanese filmmakers like Nagisa Oshima, Susumu Hani and Shuji Terayama were putting their ideas, personal obsessions, and politics first, making films that addressed the youth revolution of the time in ways that didn't just break the mold, but ignored the fact that there was ever a mold to begin with. I only mention these heady days because it was this cinematic period that kept coming to my mind while I watched Shutaro Oku’s “Death of Domomata”, a film that in the end is almost too ambitious, forfeiting connection with the audience in order to pack the screen with bravura-style filmmaking.

“Death of Domomata” takes its name from a 1922 play by famed Japanese playwright Takeo Arishima, which in turn is an adaptation of Mark Twain’s 1893 short story “Is He Living or Is He Dead?” about four starving artists who come to the conclusion that they’ll keep starving if one of them doesn’t volunteer to die so the value of his painting will sky rocket. In 34-year-old Oku’s film Arishima’s play is being staged at the Hummer and Nana Drug Rehab Center for a Christmas pageant by six of its female patients as a kind of artistic therapy. Prior to this we're told that Hummer and Nana employed oil painting classes, dry flower arranging workshops, carpentry and even Greco-Roman wrestling as a way to curb its patients' self-destructive behaviour. This production of "Death of Domomata" is headed up by Tomoko (Asumi Miwa) a pretty, wealthy young woman who is set to be released from the Rehab Center. Her character is also named Tomoko, the woman who the four starving artists are vying for. One of these, the stuttering Domomata, is set to die, if not to raise the price of his paintings then to somehow endear himself to Tomoko. Domomata is portrayed on stage by one of the female patients, a consumptive drug-addict also named Domomata, who is played in Oku's film by the charismatic, husky-voiced actress Junko Emoto (Otakus in Love, Memories of Matsuko). She also dies and the administrators at Hummer and Nana may be at fault. You can start to see that "Death of Domomata", the film not the play, quickly turns into a house of mirrors where we're not sure if we're witnessing the play or the lives of these addicts, who are also artists... or might not be. 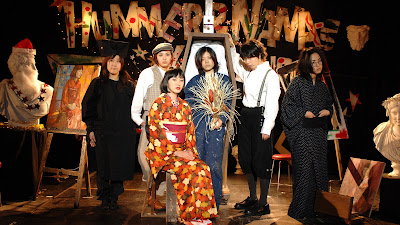 Throughout it all though Oku, a theatrical director in his own right who’s worked with everyone from Japan’s Expo 2005 to the all-female Takarazuka Revue, puts us on spin cycle, using a barrage of images and cinematographic effects from collage to raw video footage to explore ideas of the link between creativity and addiction, "Lord of the Flies" meets "Girl Interrupted" social experimentation, and female sexuality, a lot of which is stunning in its innovation. It's these techniques, though, that end up making "Death of Domomata" an alienating experience for audiences, especially non-Japanese audiences.

The main stumbling block is that Arishima’s play is hardly known outside of Japan . An English Google search for it only elicits four pages of results, many of which refer to it being the basis of Oku’s film. It may not have been Oku's intent to appeal to film audiences outside of Japan, but to use an unknown play as the basis of a film is... well imagine watching, say, Gus Van Sant's "My Own Private Idaho" with being familiar with Shakespeare's "Henry IV". It would turn into quite the slog. Oku further confuses the issue by taking the narrative of his film and splicing it up randomly, not a bad thing in itself, but again without knowledge of the original play it's nearly impossible to get a foothold during "Death of Domomata's" 80-minute running time.

“Death of Domomata” was a film that I desperately wanted to like, and there were moments in it that I honestly did like and admire (the foray into the patient's obsession with body piercing being an uncomfortable highlight). The acting is solid, there's touches of wicked humour, and there's a compelling drama in there (somewhere), but in the end even film's 1960's artistically ambitious predecessors weren't as dense and often indecipherable as this. It’s like an artist friend of mine once said to me, “Good art is making the personal universal,” but if that means that your work requires a primer on 20th-century Japanese theatre, the short stories of Mark Twain, and experimental cinema then you have to start questioning just how universal your vision is.
Posted by Chris MaGee at 11:02 PM