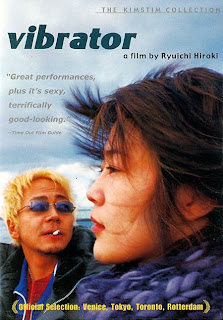 There seems to have been a whole new genre of romantic films birthed during the last ten or fifteen years. Richard Linklater's "Before Sunrise" kicked it off in 1995 and then its sequel "Before Sunset" along with Wong Kar Wai's "In the Mood for Love", Claire Denis' "Friday Night" and Sofia Coppola's "Lost in Translation" introduced us to a new brand of slow, moody love stories where lonely strangers indulge in just as much anticipation and conversation as they do lovemaking (if they ever indulge in lovemaking at all). None of these films could be called "plot driven", so for most movie audiences they've been an acquired taste, but for those of you (like myself) who've acquired a taste for these fleeting romances then Ryuichi Hiroki's 2003 film "Vibrator" is one that you should make a point to see.

Rie (Shinobu Terashima ) is a woman with issues. The winter night that we first meet her she's roaming the aisles of a convenience store hunting for sweet German wine to quell her alcoholism. She's a freelance journalist living from one writing assignment to the next and her thoughts, revealed to us through voice over and onscreen inter-titles, are an ongoing roll of alienation, compulsion and loneliness. Once she's got her bottle in hand where will Rie go? Nowhere in particular it seems, but a chance meeting gives her a destination and purpose. Into the store walks a scruffy young man with dyed blonde hair who, as Rie describes him "looks like a fisherman, but he's cute" and at that moment her cellphone vibrates in her inside coat pocket. For those of you out there hoping for marital aids to make an appearance in the film this is your cue to be disappointed. Although, like so many filmmakers of his generation, director Ryuichi Hiroki got his start working in the world of pinku eiga "Vibrator", although it includes some nudity and sex, is more concerned with the relationship that develops between Rie and this young man, Okabe (Nao Omori) after she follows him out of the store and into the snowy night. 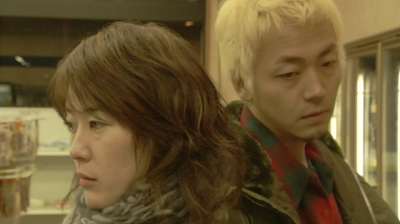 It's a potent mix of lust, loneliness, her relating to something in Okabe that has Rie jumping into this stranger's cab and heading off with him on a run up north to Niigata. It turns out that Okabe is a kindred spirit. A contract truck driver he lives from job to job, hauling everything from loads of tires to methamphetamines hidden inside frozen tuna across the highways and backroads of Japan. Like so many of these films about strangers crossing paths and falling in love, or at least in infatuation, the plot of "Vibrator" pretty much ends there, but it is only the beginning of us getting to know these two these two people. As they barrel through the night, day then night again, making stops to drop off and pick up cargo and to make love Rie and Okabe slowly reveal more and more about their pasts, their weaknesses, their desires. Okabe talks about his past as a yakuza pimp while Rie divulges her bulimia. Due to Rie's almost constant voice over we also get a totally convincing portrait of female sexual desire, something that is so very rare in cinema, whether from Japan or anywhere else in the world.