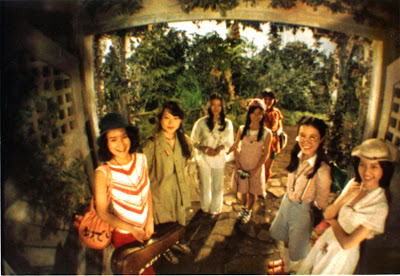 We are all huge fans of the inspired insanity of Nobuhiko Obayashi's "House" here at the Pow-Wow, so with Janus Films touring a new 35mm of the 1978 horror film around North America we were all wondering when and/ or if it would be making its way to our fair city any time soon. The ever watchful eyes of Bob Turnbull have finally ended our waiting and fretting... According to Janus Films' "House" page the new 35mm print of "House" will be screened here at The Bloor Cinema (506 Bloor Street W.) for seven consecutive nights between July 23rd and July 29th! Obviously it's too far in advance to have screening times, but as soon as that happens we'll let you know. That'll definitely be a hot ticket this summer, and it's about bloody time! See you all there!
Posted by Chris MaGee at 5:09 PM