Shinya Tsukamoto fans - Brace yourselves for "Tetsuo: The First Cut" 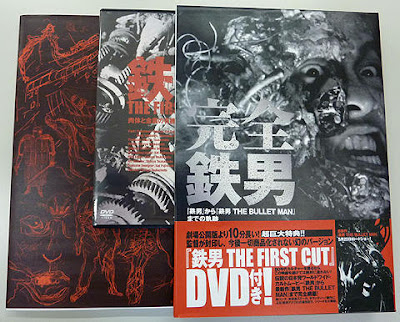 Yes, the word online is that "Tetsuo The Bulletman", the third installment in Shinya Tsukamoto's career-defining "Tetsuo" series, is possibly the weakest of the bunch (I'll personally reserve judgment until I can take a look for myself). Regardless of the success or failure of the film the upside of this third "Tetsuo" film is that it has renewed people's interest in "Tetsuo The Ironman" and "Tetsuo The Body Hammer". Now, with "Tetsuo The Bulletman" due out in Japanese theatres in May its release will be accompanied by a real treat for Tsukamoto fans. A new director's cut of Tsukamoto's 1989 cyber punk classic will be released on DVd under the title "Tetsuo: The First Cut". On top of the new cut of the film featuring 10-minutes of extra footage the DVD will be accompanied by a 160-page book with storyboards, script excerpts, interviews, and concept art for all three of the "Tetsuo" films. You can check out the package artwork for "Tetsuo: The First Cut" above and get your Yesasia and CDJapan accounts ready for the May 15th release of this astounding set.

Thanks to Wildgrounds and Eiga.com for the details on this.
Posted by Chris MaGee at 5:04 AM

We put the daily prices of all types of ferrous materials on the website of Ahan Rasan, and you can find out the types of steel prices on a daily basis by entering the following address. We are always trying in Ahan Rasan. To our customers in the shortest time. Search the following link in Google and be informed of the latest and most up-to-date prices of hardware ahanresan