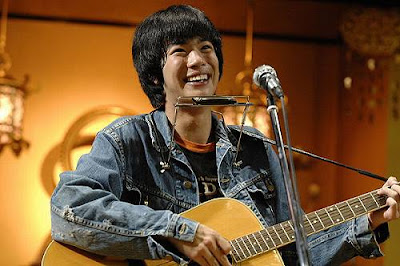 It seems like summer in North America is the hot time for Asian, and especially Japanese, film fans. Marc Saint-Cyr already reported this week on the great line-up of films coming to New York City for this year's New York Asian Film Festival, but there are more Japanese films coming to the Big Apple this summer! The folks at The Japan Society are presenting their annual Japan Cuts festival.

Some of the4 films in this year's very impressive line-up are being co-presented as part of NYAFF '10. Highlights of that of course are Toshiaki Toyoda's meditative new film "Blood of Rebirth", Tetsuya Nakashima's turn to the dark side "Confessions", the phenomenally entertaining "Golden Slumber" directed by Yoshihiro Nakamura, Miwa Nishikawa's buzz-worthy drama "Dear Doctor", Momko Ando's same-sex romance "Kakera: A Piece of Our Life", and actor-turned-director Tomorowo Taguchi's sophomore film "Oh, My Buddha!" (above).

Japan Cuts will also be bringing films to New York that their head programmer Samuel Jamier says represent the best of the best releases from Japan that have (for some unkown reason) have not received a North American DVD or theatrical release - and he's right! Yuki Tanada's "Electric Button (Moon and Cherry)", Yoshihiro Nakamura's "The Foreign Duck, The Native Duck and God in a Coin Locker", and Toshiaki Toyoda's "Hanging Garden" to name only a few. All in all Japan Cuts spells a great couple weeks for Japanese film fans.

Japan Cuts 2010 runs from July 1st to July 16th at The Japan Society in Lower Manhattan. Check out their full line-up and get details about the fest here.
Posted by Chris MaGee at 5:05 PM