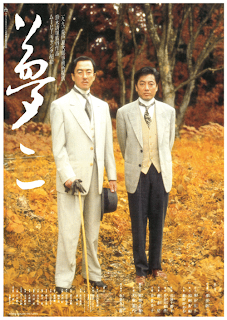 If the final chapter of Seijun Suzuki's Taisho Trilogy (1991's "Yumeji") is possibly one of the most impenetrable and narrative-free works of his 54 film, 54 year career, it could also be the most stunningly gorgeous. It pretty much has to be, though, since plot and character arc are concepts dispensed with almost completely. As joyfully weird as later projects "Pistol Opera" and "Princess Raccoon" and as radically anti-studio and genre-defying as his late 60s "Branded To Kill" and "Tokyo Drifter" were, "Yumeji" feels like the full distillation of Suzuki's approach to the visual medium of film. It's a compendium of images and movement that can generate infinite layers of meaning individually, but when combined resolve to a coarse whole. It's how a delusional, multiple personality mystery author might dream while under the influence of hallucinogenics.

Each of the trilogy's parts is a standalone film with no further ties to the others except for having been set in Emperor Taisho's reign (1912-1926). Of specific note during this period is the gradual shift towards democratic rule, liberal mores and a broader, less isolationist view of culture. The first entry in the trilogy ("Zigeunerweisen") was based on a novel by Taisho-era writer Hyakken Uchida while this last one is based on poet and artist Takehisa Yumeji. Artwork appears throughout in transitions, as ghostly apparitions, as travel itineraries, sketches and in progress paintings while the scenery they exist within feel just as composed, colourful, detailed and meaningful as any of the art. The camera seems to want to explore the variety of corners and frames within the rooms and locations of the film and that encourages our own eyes to wander and gaze at the bright hues and interesting objects that show up repeatedly (a silver gun, a red and white candy-cane rope, a yellow boat, a red and white dress, etc.). It all lends itself to the surreal dreamscape (one of the other common factors between the trilogy's films) so that when rain is suggested by filming a scene through static streaks of blue, it's hardly surprising. But it sure is beautiful. 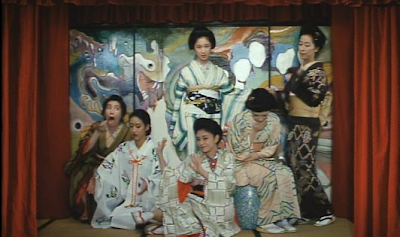 A few words about the "story". Yumeji has stopped off at a spa as he awaits his fiancee Hikono to arrive from the clutches of her father. They have plans to elope, but she is not overly healthy at the moment so it's proving difficult for her to get away. While he waits, he slides into the arms of a local prostitute and then decides to visit Hikono directly. Not quite ready to leave with him (or to consumate their relationship), he continues on his travels and meets and becomes infatuated with a woman named Tomoyo. Her husband has apparently been murdered by a roaming killer, but his body has not been found yet, so she searches for it in the lake on a daily basis. Once Yumeji becomes involved with her, a stranger arrives claiming to be Tomoyo's husband (and could very well be the man who shoots Yumeji in his dream that opens the film). To complicate things, one of Yumeji's models shows up as does Hikono. That's really only a rough guide to a variety of events - timelines jump ahead occasionally without warning (even within a scene) and it's rather difficult to recognize which of the many women is actually on screen at a given time due to their similar ways of dressing and hairstyles. It's likely part of Suzuki's plan, though, since Yumeji seems to be fascinated with the female body (with less consideration for the person) and can only sketch a particular one after being intimate with it.

One particular scene gives a good idea of how the film operates...Yumeji wants to sketch Tomoyo and requires her to be naked. He appears to be ready to sketch with all his tools as the camera cuts to a shot of a naked female with her long hair draped over her body and her face in shadow. Yumeji studies her for a few moments. The camera begins to circle her and as it does, a fully clothed Tomoyo comes in out of the shadows in the background and begins to rotate and move closer to the naked woman. The camera stops moving as Tomoyo stops right next to the model and they appear to be two halves of a whole. Cut to a close-up of the fully clothed Tomoyo looking back to Yumeji. He stares, looks down at his tools and prepares to mix a specific yellow pigment. As he looks back up, he pauses and then throws down the pigment in frustration. Cut to Tomoyo consoling him. It's a wonderful way to represent his attempt to picture in his mind her naked body without actually being given access to it. When he can't quite retain that image and the reality of Tomoyo's clothed self comes back to him, he can't continue. Via sharp edits that change the locations of characters, camera movement, non-sequiturs and lots of Dixieland music, Suzuki (who celebrated his 87th birthday earlier this week on May 24th) tries to give you an idea of an artist's internal view of the world and how it leads to his art. Let it wash over you and see what it does to your own dreams.

Read more from Bob Turnbull at his blog.
Posted by Chris MaGee at 4:54 PM

Thanks for sharing – There are couple of others which I think deserve a mention like 99 Designs etc. It will be great if you could also feature some UX sources in the list! CheersLess is more. Our lace wedding dresses best interpret the concept of amber-like purity by highlighting nothing but the texture of sheer fabrics.together with the air of hope and confidence towards life ooze out. Just release yourself from the dazzling complexity and all lost in simplicity.

The camera begins to circle her and as it does, a fully clothed Tomoyo comes in out of the shadows in the background and begins to rotate and move closer to the naked woman. The camera stops moving as Tomoyo stops right next to the model and they appear to be two halves of a whole. online asian clothes shopping uk , asian salwar kameez online uk , asian bridal dresses uk , asian suits online uk , mens short kurta uk , ready made pakistani clothes uk , salwar suits online usa , white chikankari suit designs , pink chikankari kurti , chikan suits online , chikankari work kurti

Thanks for sharing – There are couple of others which I think deserve a mention like 99 Designs etc. It will be great if you

Uncovered lightbulbs may expose food to which type of hazard
Canadian Marcellus Edson patented which food item in 1884?

Visit us for Mini Digital Scales


Get blank apparel Shirts Wholesale Polo shirts are made to look great from the sidelines to the workplace and everywhere in between.