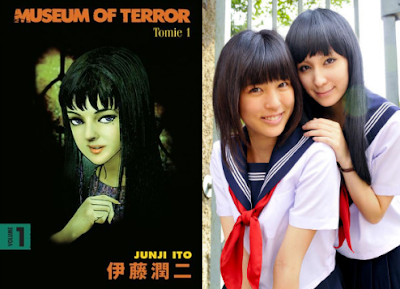 Here is yet another story that I know our Matt Hardstaff will be very happy to read about. As regular Pow-Wow readers know Matt has been the man to review the entire Tomie franchise of films over the past couple years here on the blog (check them out here), but now it looks like he'll have one more film to add to the list.

According to Nippon Cinema a brand new Tomie film, titled "Tomie: Unlimited" just began shooting... and here's the best part... none other than Noboru Iguchi is directing it. For those of you who need a little refresher, Iguchi is the director of such gore hits as "The Machine Girl", "RoboGeisha" and the not really gory but certainly campy "Ancient Dogoo Girl". Seeing that Iguchi excels at bringing buckets of blood and over-the-top manga-inspired action to each of his films his involvement in a Tomie film seems perfect.

This time out Tomie, the evil girl who can regenerate again and again after being brutally murdered, is being portrayed by 19-year-old former gravure idol Miu Nakamura (above far right), while 15-year-old actress Moe Arai (above right) will portray the sister of a girl who has been caught up in Tomie's web of lust and madness. "Tomie: Unlimited" will of course be based on the original manga series by Junji Ito.

No word on a release date for "Tomie: Unlimited" yet, but we'll keep scanning the net for more details as they come out.
Posted by Chris MaGee at 7:16 AM

As a fan of Tomie, this is great news! Even though some of the previous have been pretty sub-par, I enjoyed them in some capacity. I can't wait to see how Iguchi will handle the material, but given his style, I'm sure it will be "interesting".