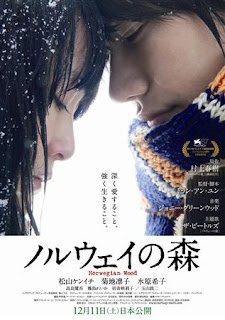 There is a point about a third of the way into Tran Anh Hung's "Norwegian Wood" when the emotionally unstable Naoko (Rinko Kikuchi) wakes Watanabe (Ken'ichi Matsuyama) from a night's sleep. "I have nothing special to say," she whispers to him, "I just wanted to see your beautiful face." This line of dialogue was the only thing I jotted down in my notebook as I sat through the 133-minutes of Hung's hotly anticipated screen adaptation of Haruki Murakami's 1987 novel. Normally I scribble along in the darkened theatre when I am reviewing a film, but this time around I just felt a page of notes wasn't necessary. This one line for me summed up the entire experience of "Norwegian Wood" - lovingly crafted, exquisitely lit shots of its handsome cast's faces that ultimately when strung together had nothing to say.

For those of you who aren't familiar with Haruki Murakami or the original novel "Norwegian Wood" tells the story of Toru Watanabe, a 19-year-old university student and his relationship with two very different women. First there is Naoko, the girlfriend of Watanbe's best friend Kizuki. Kizuki commits suicide, leaving Watanabe to drift through his life in Tokyo while Naoko's psyche begins to unravel from the grief of losing her love. Watanbe and Naoko forge their own love affair with Watanabe visiting Naoko in an asylum in the country. Back in Tokyo he becomes infatuated with the beautiful and manipulative Midori (Kiku Mizuhara) a girl who leads Watanabe along with her repeated stories of what she wants to do with him in the bedroom. Between these two romantic poles Watanabe must find the best way to deal with the grief of losing Kizuki while continuing on with his life. 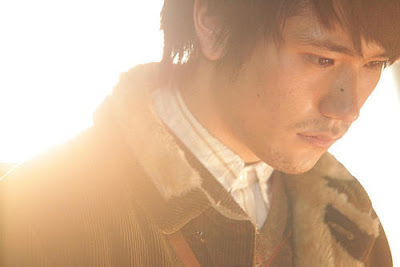 Tran Anh Hung, the man who brought us such breathtaking films as "The Scent of Green Papaya" and "Cyclo", assembled a dream team both in front of and behind the camera for this adaptation of the universally praised Haruki Murakami novel. The already mentioned Ken'ichi Matsuyama and Rinko Kikuchi are two of the most talented and bankable actors working in Japan today and model Kiku Mizuhara does an admirable job taking on the role of Midori. There were times I puzzled over why Kikuchi chose to deliver all her lines in a breathy, baby doll voice, but of all the talent onscreen she shows the most range. It's behind the camera, though, that Hung enlisted the big guns. Hung reunites with powerhouse cinematographer Mark Lee Ping Bing who had previously lensed his 2000 film "Vertical Ray of the Sun", and Ping Bing doesn't disappoint this time around. There are shot after scene after shot that provide us with visual orgasms of light and colour. One particular scene that has Watanabe, the playboy Nagasawa (Tetsuji Tamayama) and Nagasawa's girlfriend Hatsumi (Eriko Hatsume) enter a concert hall is absolutely stunning. That brings us to the music. Radiohead guitarist Jonny Greenwood provides the original score for "Norwegian Wood" and his work is truly remarkable. On the one hand he anchors the story in its late 1960's context by evoking the era with some trippy guitar work while the emotional crescendos in the film are hightened by haunting string arrangements.

So with such a talented cast, an award-winning director, a genius cinematographer, and a member of Radiohead all on board what went wrong? The blame has to be put at the feet of Tran Anh Hung whose screenplay for the film took the tragedy and the misery in Murakami's novel but jettisoned so much of what makes Murakami's writing so engaging. It's true that Matsuyama does a good job in embodying the aimless and passive male protagonist that is a hallmark of Murakami's work, but Hung somehow thought it was a good idea to lose all of the humour, albeit low key and absurd, that was present in the original novel. Also, the traveling, late 30's Watanabe who recalls his turbulent youth after hearing an orchestra playing The Beatles' "Norwegian Wood" in a Hamburg concert hall is gone as well (although some of his inner monologue has been preserved in Mtasuyama's voiceover narration). Maybe that is the fatal flaw of the film. At the Toronto International Film Festival screening Tran Anh Hung was in attendance and made a point of saying that this was his interpretation of Murakami's novel, but in this interpretation we aren't afforded the elder Watanabe's years of perspective and maturity. When you are 19-years-old and in love (or lust, or infatuation) every emotion is magnified to epic proportions. Heartbreak is like a sword piercing your heart, the indecision that new love can bring nearly tears you in two, but most importantly to this discussion of "Norwegian Wood" is the feeling of joy, elation and newness that comes with being young and in love. That is totally absent in Tran Anh Hung's film. An older man, like the older Watanabe in the novel can give insights that the young Watanabe is incapabale of doing. Because of this we are treated to scene after scene of tearful confessions, uncomfortable couplings and hundred yard stares, but every character appears to be in utter and hopeless stasis. Nothing peaks. Nothing sparkles. Trust me, when I was 19 and I was sleeping with my girlfriend, no matter how damaged or damaging she was, at that moment I was a very happy boy, but somehow in Hung's creative universe misery is the only constant.

"Norwegian Wood" was a film that I, and I think many people, Murakami fans and followers of film alike, had been very much looking forward to, so it's a shame that Tran Anh Hung's film ended up feeling as if I was sitting in a doctor's waiting room for two and a quarter hours leafing through a coffee table book of art photographs. Regardless of how entrancingly beautiful the photographs are it still doesn't alleviate the boredom and frustration of being trapped in limbo with a group of ailing strangers until I hear my name is called. Such a shame. A Haruki Murakami novel deserves so much more.
Posted by Chris MaGee at 6:46 AM