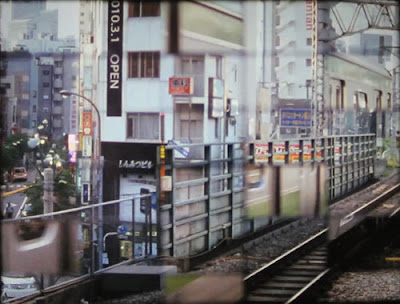 To kick off its 10th anniversary the Toronto International Film Festival's Wavelengths programme, a survey of some of the best in experimental films from around the globe, programmer Andrea Picard brought together films that celebrated urban existence in Soul of the City. The opening night of Wavelengths took the "city symphony" concept created by such filmmakers as Walter Ruttmann, Paul Strand and Dziga Vertov in the 1920's and applied it to life in cities from as close to home as the suburbs of Willowdale here in Toronto to as far afield as Palestine. Wavelengths: Soul of the City was specially sponsored by the Toronto office of the Japan Foundation though and it gave audiences at the Jackman Hall at the Art Gallery of Ontario not one but two views of urban Japan as seen through the eyes of two of its most promising experimental filmmakers.

Nagoya-born and currently Upstate New York-based film and video artist Tomonari Nishikawa's contribution to Soul of the City was his 2010 16mm 5-minute short "Tokyo-Ebisu" which is made up of footage Nishikawa shot on the platforms of 10 stations along the JR Yamanote Line ruuning through Tokyo. It's the sister film of "Shibuya - Tokyo" which unlike "Tokyo-Ebisu" shows footage of commuters exiting stations. Nishikawa employs ingenious in-camera techniques of masking off his lens and then reshooting at different locations to give "Tokyo-Ebisu" a kaleidoscopic effect. 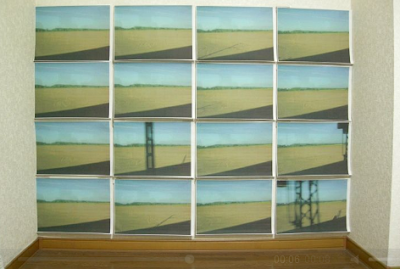 Joining Nishikawa in Soul of the City is 29-year-old Tama Art University graduate Eriko Sonoda with her 9-minute short "Landscape, semi-surround". Once again Sonoda, like Nishikawa, takes to Japan's train lines for her inspiration, shooting footage out a train window as it passes through green fields and idyllic countryside. These continuous images are them printed off on a colour printer and pinned on a wall in a grid pattern. Sonoda then uses stop-motion techniques to re-animate the images out of the train window and in the process creates a rhythmic journey of colour and sound.

Watching both Nishikawa's and Sonoda's work it is difficult not to see an influence of experimental film pioneer Takashi Ito who has made a career of using blocked off, stop-motion footage of specific sites throughout Japan. The fact that both "Tokyo-Ebisu" and "Landscape, semi-surround" both employ a grid pattern to fracture and then recreate their imagery, I think, is a a direct nod to Ito's continuing legacy. What is most interesting about the inclusion of both these two Japanese filmmakers in the Soul in the City programme is that they choose to focus their attention on transit lines, the arteries of the urban landscape, while the remaining filmmakers included in Soul of the City have focused their cameras on static sites: buildings, signs, city blocks. It raises interesting questions as to the effects of Japan's extensive web of train and transit lines to its populace.

Both Tomonari Nishikawa's and Eriko Sonoda's contributions to this year's Wavelengths programme bring both a visual music and an important insite into the constant movemnts at the heart of Japan.
Posted by Chris MaGee at 5:45 AM