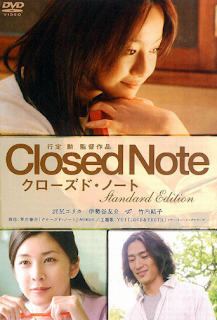 “Closed Note” is a Japanese riff on Nicholas Sparks, a movie that will polarize viewers based on their tolerance/affection for that sort of romance. Technically speaking the movie is tripe, and not particularly well-crafted tripe. Supporting characters and subplots are jettisoned when they become inconvenient; romantic and melodramatic elements are curiously underplayed when they should have been hammered home with the subtlety of “Always”. Yet it has a kind of warm and gentle relentlessness, as if the T-800 in the original “Terminator” was played by a silly, frolicking puppy. Yes, it means you harm, but it’s so adorable! Even as we sat watching it, calling out its shortcomings as if spectators at a sporting event, it wormed its way into our good graces.

Like any movie of this type it has an inoffensive, attractive cast. Erika Sawajiri is Kae, a college student studying to become a teacher. The film opens with her moving into a new apartment, in which she finds the titular notebook—the diary of previous resident Ibuki (Yuko Takeuchi), conveniently an elementary ed teacher who chronicled her entire first year of teaching and whose story is told in flashback. Kae notices a mysterious (and ruggedly handsome!) fellow gazing at her through the apartment’s open window. That’s Ryu (Yusuke Iseya), neighborhood artist and sort-of stalker. Ryu soon shows up at Kae’s day job at a high-end fountain pen store, and his brusque manner charms her. In between classes (an afterthought) and her second chair status in the local women’s mandolin orchestra (yes, you read that correctly: women’s mandolin orchestra) she escapes into Ibuki’s life by reading her diary. Ibuki also writes about how she fell in love with a special guy, and Kae decides to employ these tactics in her pursuit of Ryu. 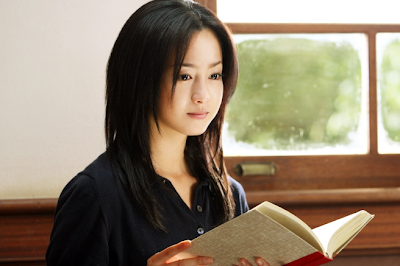 Director Isao Yukisada uses a number of tricks that worked for me despite being employed to less than ideal effect. The fictional Kyoto of the film is buffed and glossed to near-Brigadoon standards, all its streets clean and tree-lined to magnify the storybook quality of the enterprise; Every sunny day begins with flowers in bloom and birds singing, and ends with a perfect sunset that casts a golden-peach glow on everything. Kae’s apartment and street look and feel like elaborate sets, and though Yukisada definitely isn’t going meta by showing hints of exposed 2x4 holding up fake storefronts, everyone involved must have seen the 1950s technicolor musical influence. Had Ryu broken out in song on the steps opposite Kae’s window a la Ewan McGregor in “Moulin Rouge!” I wouldn’t have been shocked. Such an approach would ordinarily signify that the film is a fable, however couched in real-world vernacular, but not here. Oddly (and similarly to missed opportunity “Paco and the Magical Picture Book”), Yukisada chooses to use the same glowy idealized Kyoto for both the present day and flashback narratives. Without differentiating between the two, the fable aspect is wasted on a story which neither celebrates nor subverts the expectations raised by the visuals. The story is resolved in as unsatisfying a way as possible. It’s intended to be sad and sweet, yet feels perfunctory. It’s neither sad nor happy, just sort of there.

If you enjoy films like “The Notebook” and “Dear John” (and despite being somewhat maudlin, I quite liked the former’s sincerity and heart), you’ll find “Closed Note” to be mostly satisfying, like having a bag of popcorn instead of a proper dinner. The pieces of a good romance are all here, just assembled incorrectly. I have to wonder if Yukisada purposely engineered something off-kilter to thwart the expectations of his audience, adding a touch of real life to what could have been a slam dunk love fantasy. He’s also the director responsible for the mega-hit “Crying Out Love in the Center of the World” so he knows how to assemble the proper elements of a romantic melodrama. Like that film, “Closed Note” hits certain beats and has lots of warm, pretty images of beautiful people staring off wistfully, their minds full of longing. Also like that film, “Closed Note” meanders and underwhelms. Unlike it, however, I felt invested enough that I wanted a cleaner resolution for the characters. The film’s twist is obvious from 10 minutes in, but that isn’t a weakness—most romances aren’t about the destination so much as the journey. It’s just that “Closed Note” arrives a block or two away from where it was meant to, and takes its time getting there.
Posted by Chris MaGee at 12:52 AM