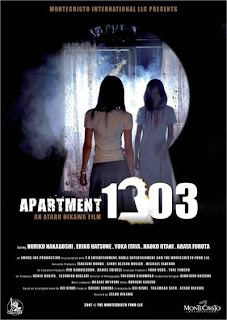 Oh Ataru Oikawa, where did you go wrong? You always seem to try and veer yourself away from the j-horror cliché, but somehow the further you seem to run from it, the closer you find yourself venturing into the world of cliché in the end. I’m not sure how the development of "Apartment 1303" went, but it’s based on a book by Koi Oishi, who also had some assistance in the script writing phase. What I do know is that at some point, Ataru found himself in the hands of Daniel Fridell, Cindy Nelson-Mulle, Michele Taverna and MonteCristo International. Not sure how much these people, who had a hand in funding and distributing the film, had a hand in its actual creative culmination, but they must have had some input, seeing as how they are also doing an English language remake. Good business sense, since they get two films and don’t have purchase the English language remake rights from anyone since they’re doing both, but could they have watered down Ataru’s concept?

Sayaka moves into apartment 1303, a small but affordable residence in a very nice building. Her friends are shocked how cheap it is, joking that maybe someone must have died there. Then, unexpectedly, in front of all of her friends, Sayaka jumps from the balcony to her death. At Sayaka’s funeral, her older sister Mariko (Noriko Nakagoshi from Orochi) talks with one of her friends who witnessed her suicide. She was never depressed, never showed any signs of suicidal tendencies, it was just out of the blue. Mariko wants to investigate. She visits the apartment and meets a strange young girl with a teddy bear that lives next door. The closet in one of the rooms seems to emanate a strange smell, and appears to be almost hypnotic for most young, single women. Then Mariko discovers Sayaka isn’t the only one to have jumped from the balcony of Apt. 1303. A string of suicides have taken place there over the years, and yet the superintendent continues to rent it out. With the help of a friendly detective Sakurai (Arata Furuta who seems very out of place in the film, and must have been doing somebody a favour to appear here), Mariko begins a quest to discover what caused her sister to leap to her death. 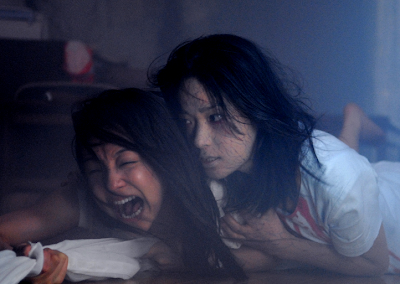 "Apt. 1303" is all over the place. Either there were too many hands in the pot or Ataru is on the pot, but I don’t think anyone knew what kind of a horror film they were making. What starts off mocking the j-horror cliché of the vengeful ghost woman in white with long black hair actually incorporates all those clichés by the films end. What has at its heart a tale of a cyclical, almost viral relationship between mother and daughter turns into a shallow excuse to create sympathy for Mariko, who really has no real character or development. Ataru has a few original ideas here, like most of his films, but they degenerate into terrible CG and predictable outcomes. He’s even able at times able to create some striking visual imagery and tense, claustrophobic moments, but then those powerful images are followed by trite, cheap, poorly shot cinematography with terrible climaxes and cheap scares. Plus, there are gapping plot holes, the biggest of which is the book written about the occurrences at the apartment. It’s a good narrative device, and a clever way for Ataru to give us lots of exposition without actually giving us talking heads, however, if the occurrence at Apt 1303 are widely known enough to have been all over the papers and have books written about it, why does no one in the film except for the detective know about it?

Why they are remaking this film is beyond me. Why they made this film in the first place is beyond me. There is unfortunately very little here we haven’t seen before, a mess created by mixing one part Stephen Kings "1408", one part Hideo Nakata’s adaptation of "Dark Water" and one part crap.

Read more by Matthew Hardstaff at his blog.
Posted by Chris MaGee at 1:55 PM