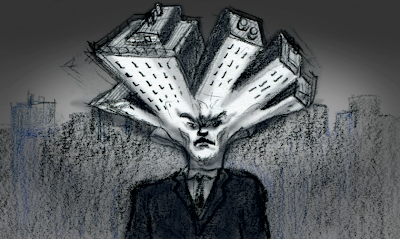 Shinya Tsukamoto has been very busy branching out in the past few years. Having established his reputation as the creator of "Tetsuo The Iron man" and a slew of other cyberpunk, body horror films in the 90's he's gone on to flirt with the mainstream with his "Nightmare Detective" films, contribute an adaptation of a classic Osamu Dazai short story to NHK's "Kaidan Horror Classics" and given audiences the final chapter in the Tetsuo trilogy with "Tetsuo The Bullet Man". That film actually spawned a manga, but so far Tsukamoto hasn't branched out to the last frontier... animation. That is until now.

Tsukamoto has recently completed a short (a very short 24-second) animated promo for the Ca' Foscari Cinema in Venice that will premiere tomorrow, February 2nd. Professor Maria Roberta Novielli of the Film Studies Department of the Ca Foscari University of Venice described the short, which was hand drawn by Tsukamoto himself, as being "really intense, at an amazing high speed. It's very Tetsuo-like in genre and mood, and also a kind of homage to cinema itself." She goes on to explain Tsukamoto's intentions behind this piece for the University, "Tsukamoto some weeks ago said he also wanted to communicate the forthcoming changes in all the students' futures."
Right now all we have of this Tsukamoto animated short is the still image above (very Tetsuo, don't you think?), but keep checking back with us. We'll hopefully have a link to the full short film very soon.
Posted by Chris MaGee at 10:59 AM