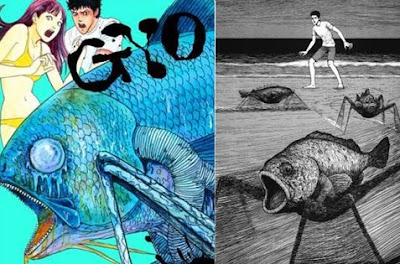 We here at the J-Film Pow-Wow like our weird manga and anime. One particular favorite of our staff writer Matthew Hardstaff is the "Tomie" series of horror films based on the manga of Junji Ito. Ito is also the man behind the twisted (literally) 2000 film "Uzumaki" directed by Higuchinsky which makes us laugh and cringe in equal measures, so any news of a new adaptation of a Junji Ito manga is good news for us.

This week Anime News Network reported that Junji Ito's 2002 horror manga "Gyo" will be adapted into an anime. The announcment came in an article published in Shogakukan's Big Comic Spirits which just hit the newsstands in Japan, but there are currently no details as to if this will be an anime series or a feature film.

"Gyo" tells the story of a young man named Tadashi and his girlfriend Kaori who find themselves trapped on an island in Okinawa surrounded by giant dead fish who are crawling out of the sea on meal legs. It turns out the fish are carriers of a lethal genetically engineered plague created by the Japanese military and it's up to Tadashi and Kaori to get off the island alive and figure out how to stop this invasion from the deep.

Awesome, I love uzumaki, as well.