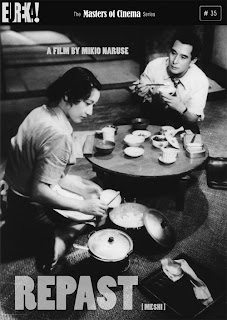 The immediate post-war years in Japan were obviously a transitional period for the country with a new constitution, the continued Allied occupation and infrastructure that still needed to be rebuilt. The boom years were still a ways off, so the late 40s and early 50s were indeed, as several characters mention in Mikio Naruse's 1951 film "Repast", "hard times". By using an unfinished story by Fumiko Hayashi as his starting point, Naruse takes a look at a specific segment of society that was struggling to find its place - lower and middle class women. Specifically a salaryman's wife named Michiyo (played wonderfully by Setsuko Hara), but the tale as told touches on numerous aspects of other women's daily lives.

Context for the film is important. Though struck from a similar mold as Douglas Sirk's Hollywood melodramas, Naruse played more with small details and subtle wordless looks by his characters than grandiose moments, so there's more room for interpretation. When a character at the end of the film states "maybe that's where a woman finds her true happiness", it could easily be construed to represent a statement by the film about where a woman's place lies. Given the push and pull of what society thinks and what options may or may not be open to women (some of which gradually appear throughout the film), that final statement seems to address the sad fact that there are few available opportunities for Japanese women at that point in time. Michiyo is essentially trapped in her situation as the wife/maid of a disengaged office working husband (Naruse doesn't hesitate to frame her in boxes or shown behind the barred double set of doors of her house) since everyone keeps telling her how happy she must be as a wife and how sad their own lives are. 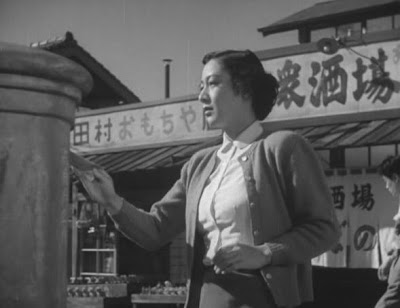 Michiyo's feelings of wanting a better life are stirred by the arrival into her life of her husband's lovely, flirtatious 20-year old niece Satoko. She's run away from home and an arranged marriage to try her hand at an office job of some kind. At least, that's her story. As a representative of the first generation of women growing up post-war, she's more aggressive and self-centered wanting to marry for both love and money. Her presence catches husband Hatsunosuke's attention - he may be her uncle, but it's hard to resist Satoko's giggles and coy smiles. Michiyo isn't so much jealous as annoyed since his day to day conversation with her isn't much more than wondering when his meals will be brought to him. As she visits her old school friends, runs into her handsome cousin (who is obviously taken greatly with her) and visits her family in Tokyo, she wonders about what else life could have in store for her. What options could be open to her? One woman after another tells her, however, that she should be happy with what she has. At least she isn't either alone or incredibly poor.

The film's title in Japanese ("Meshi") translates typically to "A Married Life". Though one can read this as an attack on marriage and how couples might typically fare, another view is that perhaps the characters actually learn and realize that effort must be put into a married life in order to get something back out. Watching the film 60 years on, it's hard not to grow frustrated at Michiyo's husband and at her own position, but given the circumstances of the post-war period, the film posits that they should try to make the most out of life. The film's English title refers directly to a meal - the time that one should pause and recharge oneself. Michiyo (and many of the characters in the film) has a habit of simply ignoring difficult or unwanted questions by avoiding any response. By the end of the film, though no one's lot in life has changed in any extraordinary way, some of the characters may have at least decided to engage themselves again. The country itself is going through its own "repast", so the characters need to keep trying in the mean time. It's a bit hopeful, a bit sad and wonderfully subtle in leaving all possibilities open.

Read more from Bob Turnbull at his blog.
Posted by Chris MaGee at 10:47 PM