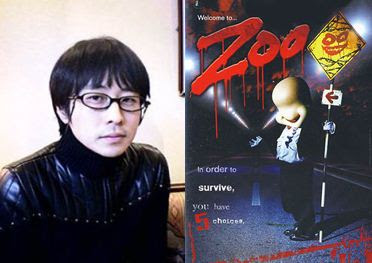 Regular readers of the J-Film Pow-Wow will remember that back in February we told you about how the 2011 Toronto Comic Arts Festival was bringing some very special guests to the city, namely manga artists Natsume Ono and Usamaru Furuya. It was shortly after that announcement that Festival Director and co-founder Christopher Butcher contacted me about arranging a special screening of the omnibus film "Zoo" based on work of Japan's horror and mystery wunderkind Otsuichi. What's the connection? Let me explain...

"Zoo", which brings together five chilling tales of murder, mayhem, as well as twisted family and love connections, includes a single animted segment titled "Sunny's Song". This story, about a scientist who has constructed a female cyborg, was adapted to the screen by manga artist, and TCAF '11 guest, Usamaru Furuya (above left). Not only did Furuya write the screenplay for "Sunny's Song", but he also drew up the storyboards and created the character designs. For fans of Furuya, best known for his avant-pop manga like "Palepoli" and "Short Cuts", "Zoo" is a film of special interest.

Now Toronto audiences will be able to see "Zoo" on the big screen on Monday, May 9th at 7:00PM at the Toronto Underground Cinema (186 Spadina Avenue)... and the best part is that Usamaru Furuya will be in attendance! Makew sure to stick around after the screening for a Q&A session with Furuya conducted by yours truly!

You can check out additional details about TCAF's screening of "Zoo" and all the other great events for this year's festival by visiting the Toronto Comic Arts Festival website here.