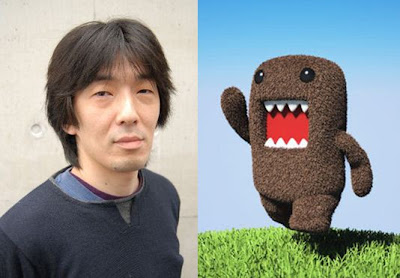 Godzilla, Hello Kitty, Ultraman, Astro Boy... All of these have become unofficial ambassadors of Japanese pop culture around the world. One of the most recent characters to join this pantheon is Domo-kun. Created as an on air mascot for NHK Domo has gone on to become a worldwide phenomena, appearing in commercials for American retailer Target and having his likeness grace everything from plush toys and back packs to t-shirts and USB sticks.

Now good news has come down for all the fans of this toothy little square-headed fella. The organizers of this year's San Diego Comic Con have announced that Tsuneo Goda (above left), the creator of Domo-kun, will be a special guest this year. The 44-year-old animator, whose other creations include the cat Komaneko, will be joining other guests such as comics author Grant Morrison and "Yummy Fur" creator Chester Brown between July 21st and 24th at the San Diego Convention Center.

Thanks to Anime News Network for this bit of news. We leave you with a bit of Domo-kun in action...