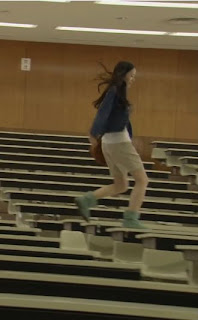 海への扉 (Umi he no Tobira)

Reiko Ohashi is one of the filmmakers from the Tokyo University of the Arts’ Graduate School of Film and New Media whose work is being presented at this year’s Nippon Connection. Her graduation film, "Door to the Sea," manages to pull off the very tricky feat of maintaining a deeply lyrical feel without relying too much on overt stylistic flourishes. On the contrary, it remains consistently rooted in a simplicity that underlines the power of its approach to its characters. Each one is admirably written and portrayed, and arrives fully realized with his or her burdens, be they lingering pains from the past or looming doubts about the future.

Ken (Shun Kaneko) is a young man who lives on his own. To keep himself afloat, he relies on the income he gets from a small job delivering newspapers on his bicycle. He spends much of his spare time sneaking into a college archaeology class, having written the entrance exam while never becoming fully enrolled due to his inability to pay the tuition fees. At the lectures, he attracts the attention of Haru (Rio Tomita), who confronts him after he steals an ancient bone from the archaeology department. They begin a relationship and start living together, for a time enjoying a life of peace and contentment. But it is soon disrupted by the reappearance of Ken’s estranged mother (Yoriko Dohguchi), among other factors. 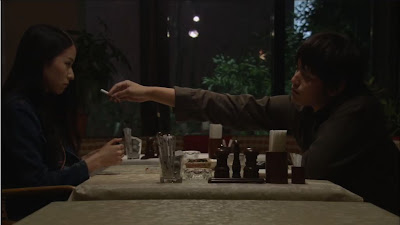 The young couple at the centre of "Door to the Sea" aren’t necessarily trapped in their lives, but nor do they have a great amount of freedom or mobility. They – mainly Ken – are hampered by a lack of money and realistic job options that many in today’s capitalist societies can likely sympathize with. Some hope emerges for Ken through the class’ teacher Shikishima (Ryuichi Ohura), who remembers his thesis as being well written, allows him to attend graduate class meetings and arranges to bring him along to excavations. But Ken’s interest in archaeology seems to be driven more by vague curiosity than passion, as if the field were more of an intriguing possibility for him than anything else. In both his and Haru’s behavior, one can easily sense an overwhelming feeling of aimlessness and uncertainty regarding where their lives are headed. Together, they try to see to more immediate, basic needs: money (even though it just comes from Ken’s paper route), stability, love.

At numerous points, the film comes close to teetering over into exaggerated melodrama, but remains so poised and mature that, thankfully, this never happens. A good example of this is the mother’s first encounter with Haru. A cruel examination is conducted as the mother looks the girl over, takes some money from her wallet and simply says, “You don’t suit him” before leaving. This behavior is obviously mean-spirited, but it is also clearly an act meant to intimidate. Later, the two women meet again, this time more on the same level and open with one another as they discuss Ken. He gives the film its most emotionally volatile moments when he launches into a destructive tantrum fueled by his suspicions that Haru is being unfaithful to him. Complicating matters significantly is Shikishima’s fixation with Haru, which is built upon her resemblance to his former girlfriend who killed herself five years previous. Through this web of story strands and relationships, Ohashi addresses doubt, self-criticism, blame, purpose and the desire to change and improve – all universal elements that viewers can easily identify with.

Among the film’s most poetic moments are two train rides – one at the beginning, one near the end – that are directly put forth as encapsulations of Ken and Haru’s own passages through life. It is hard to say what exactly they are heading towards, but at least they are going somewhere. With "Door to the Sea," Ohashi gives a fine consideration of highly relevant questions while proving her considerable talent and intelligence as a filmmaker. Hopefully, she will be able to further hone her strengths with another film project before too long.

Another page with "Outside My Window". I just love her window element so I turned it into a glass door this time.
Shipping Jobs

If you want your ex-girlfriend or ex-boyfriend to come crawling back to you on their knees (even if they're dating somebody else now) you must watch this video
right away...

(VIDEO) Have your ex CRAWLING back to you...?