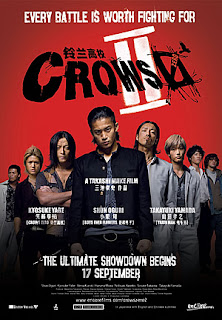 I almost feel unqualified to write a review about "Crows Zero II". I missed out on the first film and know nothing about Hiroshi Takahashi' wildly popular manga series that the films are based on. So going into a film like "Crows Zero II" I expected to be somewhat confused and I was not disappointed. The film is soaked in its own mythology and it doesn’t help that it features more characters than a Russian novel. So for at least the first half of the film, I was trying to understand the rules of this desolate world and trying to remember the names and motives of each character.

As far as story goes, what I could make out is that there are two rival school gangs, Suzuran and Hosen, and they’re part of an alliance. This alliance is broken when Genji Takiya (Shun Oguri), the leader of Suzuran boys decides to protect Kawanishi (Shinnosuke Abe), a former member of their gang from the Hosen boys. Years ago, Kawanishi lead the Suzuran gang against the Hosen gang in an epic brawl that ended in dishonour. Kawanishi broke the code by stabbing to death the leader of the Hosen gang. You see, in this graffiti covered dystopia, battles are won with bare knuckles not weapons. The Hosen gang want their man and use the opportunity to declare war on their rival. 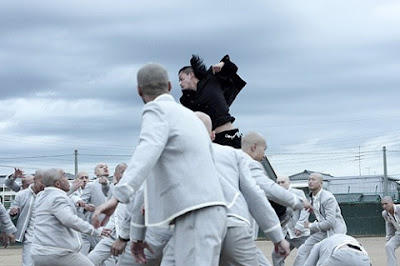 With Takashi Miike behind the camera again, things get off to a frenetic start. The brawls are gritty, visceral and keep coming at a fast pace. But then, things come to a screeching halt when Miike and the scriptwriter decide to replace the pulse pounding action with exposition. Characters spend a generous amount of time running their fingers through their ridiculous hairdos or pontificating. And to make matters worse, for the first half of the film there’s no one character that the audience can latch on to. The story just bounces from one character to the next, not spending time to develop any of them. After awhile it becomes disorienting because you don’t even know which character is driving the narrative.

With this being a Miike film, there are bound to be some odd choices here and there. Out of nowhere, he throws in a bit of slapstick comedy and random concert footage. Miike’s strength as a filmmaker is that he’s able to juggle elements from different genres and incorporate them seamlessly into the narrative. Here, it doesn’t work. "Crows Zero II" is incredibly subdued for a Miike film and when some of the more ridiculous elements are introduced it ends up being disruptive rather than interesting.

The one thing that people will latch on to while watching the film are the fight scenes. The brawls are fresh and exhilarating the first time around, but you get tired of watching guys punch each other continuous pretty quickly. Not only does the action get boring after awhile, but you start to wonder what exact is it that set these guys a part from one another? It’s obvious that every character in this film can throw a punch but what makes Genji Takiya so special? Why is he even the leader of the Suzuran boys?

If you’re a fan of the manga series or the first film or both, then you’re going to see "Crows Zero II" no matter what. But for someone like me who’s just expecting some balls to the wall action and a little of the trademark Miike zaniness, I must say I was slightly disappointed. The action was generic and the story too bland for me to get invested in. The film ends with a little setup for a third film and if you’re a fan then that’s great news, for me, not so much.

Read more by David Lam at his blog
Posted by Chris MaGee at 11:14 AM