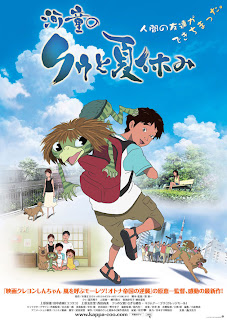 河童のクゥと夏休み (Kappa no Kwu to Natsuyasumi)

It's doubtful that you will come across any kappa in Japan these days. The mythical creature, whose name translates to "river child", has a history in Japanese folklore that stretches back centuries. A look through the prints of famed artist Kitagawa Utamaro and his 18th-century contemporaries gives us a glimpse of this elusive creature -- basically humanoid, but with the features of a turtle (shell and beak) and a frog (webbed hands and feet). It's unlikely people would want to seek out a kappa. They alternate from being an innocent trickster who likes to pass gas to a dangerous spirit who drowns women and children, but should someone come across one the best thing to do is bow. It's said the kappa will bow in kind and the dish of water on top of it's head will empty, robbing the kappa of its power. The stories of the kappa say they haunted many rivers and ponds throughout Japan, but most notably in the city of Tono in Iwate Prefecture and throughout Saga Prefecture. I say "haunted" as opposed to "haunt" because in this modern technological age you'll find few who believe that the kappa ever existed, and no one who has ever clapped eyes on one. That is unless you are Koichi Uehara, the young boy at the heart of Keiichi Hara's 2007 award-winning animated feature "Summer Days with Coo".

There were, and still are, many people who figured "Summer Days with Coo" was a children's movie; but with an opening scene in Old Edo in which Coo, the titular kappa, witnesses his father being slaughtered on the banks of a river by a panicked samurai it's obvious this is not the case. If the murder of his father wasn't traumatic enough for Coo he then gets swallowed up by an earthquake. Cut ahead 200 years and young Koichi Uehara is being bullied by some school mates on the banks of the same river. He trips over a stone, which splits open and reveals what Koichi believes to be a fossilized turtle. Taking it home he runs it under the tap to clean it, but something miraculous happens. It comes to life... and it isn't a turtle. Soon Koichi and his family are faced with the impossible -- a kappa is in their home! It's true that anyone in real life faced with such a discovery would immediately call the police, the government, a pack of scientists or all of the above, but in "Summer Days with Coo", adapted from the series of children's books by Masao Kogure , the Ueharas make this 200-year-old creature part of the family. Named after the sound he first makes when he is resuscitated, Coo is soon schooling the Ueharas on what life with a mythical creature is like. Coo really does love cucumbers, the food that the folktales say he would, and he also has a passion for sumo wrestling. Coo does a lot of learning himself though, not just from the Ueharas but from their pet dog, Ossan, who can communicate with Coo telepathically. Soon Coo is wondering where there may be other kappa, but a summer vacation trip to Tono, the unofficial kappa tourist town, comes up blank. Koichi manages to keep Coo a secret on that trip, but he and his family can't protect the kappa forever. When the media gets a hold of the story that an honest-to-god kappa has appeared in modern Tokyo life for Coo and the Ueharas becomes very complicated. 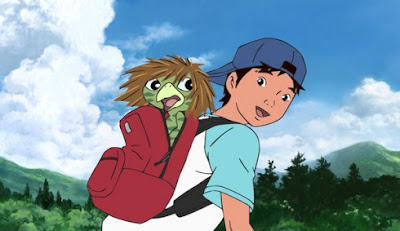 Animation director Keiichi Hara has gone from one iconic cultural figure to another with "Summer Days with Coo". Hara rose to fame directing not only episodes of TV Asahi's animated series "Crayon Shin-chan" but also 13 "Crayon Shin-chan" feature films. Shinnosuke "Shin" Nohara, the 5-year-old protagonist of Yoshito Usui's famed manga is not a supernatural kappa, but he holds an equally honoured place in Japanese pop culture iconography. The true talent of Hara as a director comes from the fact that he takes these instantly recognizable characters and uses them to tell stories about growing up in Japan and the Japanese family. While "Shin-chan" and "Coo" may share these universal themes, though, the similarities don't extend to the way in which Hara and his staff of animators depict them. Hara gained a new respect for the 2001 film "Crayon Shin-chan: The Storm Called - The Adult Empire Strikes Back", which began to experiment with the cartoonish and very stylized look of the original "Shin-chan" manga. With "Summer Days with Coo" Hara abandons the illustrations of Yuichi Watanabe from the original Masao Kogure books and instead gives his "Coo" a totally realistic style, something many of Hara's anime peers don't do with their work. Animators such as Makoto Shinkai, render landscapes and backgrounds with exacting detail, but draw give their characters exaggerated, stylized features. That's not the case with Hara and "Coo". The unfamiliar world that this kappa encounters, from landscapes to people, is totally familiar to us humans in the audience.

While "Summer Days with Coo" may vary from the anime norm when it comes to style it still explores a theme that has been featured in the works of some of anime's best known masters -- that of environmental destruction and displacement of native species. It is as if the knowledge that the technological and economic boom of the past 50-years in Japan, which has given unprecedented improvement in quality of life, has also taken away forever the natural source of so many Japanese traditions and beliefs. In Hayao Miyazaki's films like "Nausicaa of the Valley of the Wind" and "Princess Mononoke" the struggle between nature and humanity is played out on a monumental scale. Meanwhile, Miyazaki's Studio Ghibli partner Isao Takahata injected comedy and a glimmer of hope into the battle for the natural world in his film "Pom Poko". If you're Mamoru Oshii, the director of the cyberpunk drama "Ghost in the Shell" there is no hope. Nature and our own humanity has eroded to such a degree that machines and man have fused into one. Keiichi Hara brings a different angle to this oft-repeated theme. In his world the sun still gleams off brooks and rivers, there are still lush green fields and forests to explore, but they lack the spark that was once provided by their legendary supernatural inhabitants. Coo himself feels like a stranger in his native country.

It's this last aspect of "Summer Days with Coo" that makes it so poignant, because while one lost boy, our little kappa Coo, goes searching in an unfamiliar world for others of his kind his traveling companion, young Koichi, is venturing out into the same world for the first time. It's here he gets a taste of independence, of frightening risks and of first love with a young female classmate. Most importantly he discovers true friendship. Yes, it may be with a 200-year-old water spirit with webbed hands and feet, but Coo becomes a true friend nonetheless. So many films that want to express ideas of friendship, trust and love end up coming off as pedantic, maudlin or saccharine, but Hara's "Summer Days with Coo" is none of these. In one word, it's magical.

"Summer Days with Coo" will be screened for free September 20th at the Japan Foundation Toronto with director Keiichi Hara in attendance. For additional details and to RSVP click here.
Posted by Chris MaGee at 8:28 AM