Check Out the 2nd Block of Films Planned for the 2012 Shinsedai Cinema Festival! 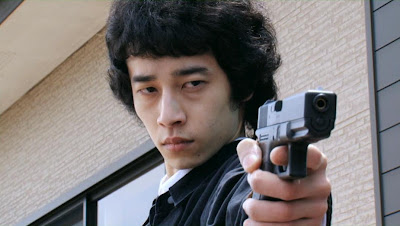 Recently, the Pow-Wow's editor-in-chief Chris MaGee has been hard at work preparing this year's Shinsedai Cinema Festival, which will be held in a new venue, Toronto's Revue Cinema, from July 12th to the 15th. Co-directed and co-programmed by Chris and Jasper Sharp, author of "Behind the Pink Curtain: The Complete History of Japanese Sex Cinema" and the recently released "Historical Dictionary of Japanese Cinema" and co-founder of Midnight Eye, the festival will be continuing its mission to bring rare and exciting new films from the current independent film scene in Japan to eager and curious North American audiences. This past Monday (April 16th), thanks in large part to the efforts of the festival's web manager Robert Harding, Shinsedai announced its second wave of films that will comprise the complete festival lineup (set to be revealed in its entirety sometime in May). Here's a look at the films featured in the announcement:

• End of the Night (Daisuke Miyazaki) - Helmed by Kiyoshi Kurosawa's assistant director on "Tokyo Sonata," this fusion of the Nikkatsu crime films of the 1960s and Takeshi Kitano's yakuza works, follows hitman Tamegoro as he raises a child claimed from one of his jobs as his own son, training him to take up his legacy of crime (pictured above).

• Zero Man vs. The Half-Virgin (Sakichi Sato) - From the writer of Takashi Miike's "Ichi the Killer" and "Gozu" comes an eccentric comedy about a policeman who is stricken with amnesia and begins seeing mysterious numbers on people's foreheads whenever he becomes aroused - perhaps indicating the number of sexual partners each person has had? This film is co-presented by the iconic Toronto DVD rental and sale shop Eyesore Cinema.

• The Naked Summer (Kenji Okabe) - This music documentary, shot by regular Hirokazu Kore-eda cinematographer Yutaka Yamazaki, follows butoh dancer Akaji Maro as he organizes his annual retreat in the countryside for dance professionals and amateurs alike, who will devote themselves to learning more about the fascinating dance form in preparation for a performance.

• Battle Girls and Bondage: A Pink Film Double Bill - In what will be the first-ever theatrical screening of pink films in Toronto, Shinedai is proud to present, in collaboration with both L.A. distributor Pink Eiga and Toronto fetish clothier NorthBound Leather, a double-bill of Mototsugu Watanabe's "Sexy Battle Girls" and Osamu Sato's "New Tokyo Decadence: The Slave." Please note that this will be an 18+ age-restricted screening event.

As you can see, there is a pretty diverse selection of genres to viewers to choose from, illustrating the festival organizers' goal to bring many different facets of Japanese culture to the Revue this upcoming summer. With such films on the way plus the attendance of special guests and availability of Ontario Spring Water Sake from the festival's official beverage sponsor at the theatre bar, this is sure to be a very fun and memorable event.

The full announcement at the Shinsedai website can be visited here. Follow the Shinsedai Cinema Festival on Facebook and Twitter, and be sure to stay tuned for the final announcement that will reveal the festival's full lineup!
Posted by Marc Saint-Cyr at 12:52 PM

Ahead of your close friend gets much too involved with Virtual PCs and partitions she should verify the Home windows windows 7 home basic product key Compatibility centre￡?which provides a big and growing database of products and solutions and wherever readily available, back links to patches and upgrades.