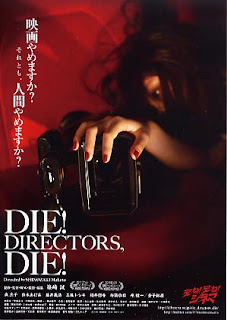 “Die! Directors, Die!” feels very much like a giant joke being played on its audience. But the question is whether it is a sneakily elaborate one that actually has some meaning behind its attempts at comedy or a winding, clumsily told one that botches its own punch line. The surface elements of the film will likely turn off some viewers right away: shakey, unpolished MiniDV camerawork; jarring, shrill jump scares and bursts of violence and a cheap, in-your-face approach to gore that seems directly inspired by the notorious “Guinea Pig” film series. In many respects, it cleanly fits in with the multitudes of v-cinema schlock that have come before it. But where it throws a curve ball of-sorts is in its numerous comments on filmmaking and the true roles of both directors and movies, which are first introduced through its amusingly provocative title.
“Die! Directors, Die!” opens with a student’s graduating film being shown in a screening room at the newly relocated Film School of Tokyo. The project is essentially a loud and clunky mash-up of horror movie imagery that the young director intended to be “the ultimate horror film.” His teacher, Shimazaki, harshly criticizes the film and labels it as a disgrace to filmmaking, but shortly after he in turn is denounced by another student who hurls such scathing remarks as, “Pure directorial visions suck!” This causes Shimazaki to suffer a mental breakdown, and he bursts back into the screening room armed with a spear attached to a camera that brings to mind a similar weapon from Michael Powell’s famous “Peeping Tom.” With it, he claims forty-two victims in an extended, over-the-top massacre sequence before attempting to kill himself, then vanishing. Four years later, a group of film students led by Natsuki, their controlling director, seek out the site of the incident to shoot their own film. However, odd paranormal occurrences and strange behavior from some of the crewmembers soon give way to a chaotic and unpredictable onslaught of events. 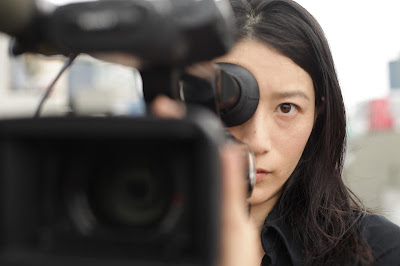 Perhaps to look too closely at – or react too negatively to – the rough, amateurish quality of “Die! Directors, Die!” is to miss or ignore the opinions declared by the young filmmaker at the beginning, who proudly claims he doesn’t care at all about film theory and believes he makes films for audiences, not himself. Or maybe it is the highly negative portrayal of directors, from the naïve student to Shimazaki to the crazed Natsuki, that is most important here. Several other characters also trash-talk cinematic authors, including a member of Natsuki’s crew who exclaims, “Directors are all a bunch of lunatics.” It could be that all of this is meant to address and attack the tendency of filmgoers – particularly cinephiles – to focus on the director and his or her voice as the main creative factors in a film. And in turn, perhaps cinema itself – or, at least, the kinds of cinema that commonly attract attention and praise – is being rejected outright, and “Die! Directors, Die!” is meant to be seen as a piece of anti-cinema that gleefully embraces its unattractive techniques as an extended middle finger to established habits and expectations.
But for every intriguing, potentially thought-provoking ingredient, including the anti-director remarks, a number of references to well-known films and filmmakers and a trip to snowy Yubari – of course, home to the legendary Yubari International Fantastic Film Festival – there are at least two that throw wrenches into the works, blurring any meaningful attempts at coherent commentary with goofiness, immaturity and befuddlement. The horror plotline, complete with classic pale-skinned, long-haired, contorting ghosts and a violence-inducing video recording, seems to suggest an attempt at a full-fledged genre product rather than a clever deconstruction. The purposely icky, gratuitous instances of violence come across as plain silly and designed solely to court shocks and laughs – especially when it reaches such ludicrous points as a newly-born, clearly fake baby being swung around a room by its umbilical cord. The characters are never fully developed enough to warrant a proper connection with the viewers, and their wandering trajectories are often cumbersome and tiring to watch unfold. Altogether, despite all the suggestions that there is something liberating and valuable to take away from the shamelessly crude nature of “Die! Directors, Die!” I simply felt that it was too muddled and unrefined to be taken seriously all the way. But then again, maybe I’m just blind to the inherent suckiness of pure directorial visions.
Posted by Marc Saint-Cyr at 3:52 AM

The ideal option to keep away from getting cheated is to have at the least an inkling of what the difficulties together with your auto might be before you head on out for the shop to buy the carprog full v4.01.

Lower Back pain in Toronto: As the most expensive form of automobile ground transportation, limousines are culturally associated with extreme wealth or power and are commonly cited as examples of conspicuous consumption. Among the less wealthy, limousines are often hired during special events (most commonly weddings, proms, and bachelor parties).Foot reflexology Toronto

MORE than 1,000 Daily Deal Sites. MORE than 1,000 Deals in Each City.
ONLY 1 Site to Rule Them ALL. Find Deals, on YOUR Terms. Welcome to oDeals.org daily deals toronto.

I am aware that W7 had a facility referred to as Digital Computer system, whereby you could possibly partition your hard-drive and load an alternate functioning process but I can?
windows 7 ultimate product keyt find out if this is certainly obtainable in W8. Is there a Digital Computer option for W8? Adhering to on from this, could you entry knowledge data files on partitions in addition to the one that you may have booted-up from?

The iPad garnered the reputation as a new kind of windows7retailbox device created for carrying out enjoyable issues at residence click here. Persons had been right away taken together with the reality that the iPad could do lots of exciting points, endearing it for the masses.

Discover How You Can Master Your Habits And Reprogram The Subconscious Brain To Get Any Result You Want In Your Personal Development and Fulfillment!

Norton Antivirus Basics and Norton Small Business as per their particular needs. The difference between all these security software from Norton lies in the level of security and number of PCs they protect from the viruses. Norton security software has been also classified keeping in mind the diverse specifications of both businesses and consumers using Windows or Mac OS.
http://nortonnortoncom.com

Norton Antivirus Basics and Norton Small Business as per their particular needs. The difference between all these security software from Norton lies in the level of security and number of PCs they protect from the viruses.
http://nroton-nroton.com

www.office.com/setup is a global leader in providing technical services. When you call us, you get connected to one of our experts who would initiate a remote session with your PC, and fix your system issues with your approval, and will then guide you with further steps.
http://officecom.org


Worth every penny. I don’t want to think about the emotional energy and time I’ve spent reading this japan cupid reviews.

If you had financial problems, then it is time for you to smile. You only need to contact Mr. Benjamin  with the amount you wish to borrow and the payment period that suits you and you will have your loan  within three working days. I just benefited for the sixth time a loan of 700 thousand dollars for a period of 180 months with the possibility of paying before the expiration date. Mr Benjamin has be helping me with loan.Make contact with him and you will see that he is a very honest man with a good heart.His email is lfdsloans@lemeridianfds.com and his WhatApp phone number is + 1-989-394-3740