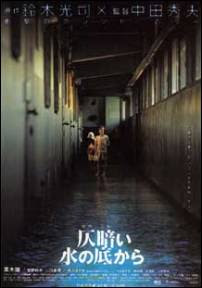 It still sounds strange for me to say this, but at the end of the 20th century (weird…) horror films in the West had evolved through the monster films, the garish blood baths of the England’s Hammer films, Satanic shockers like “The Exorcist” and “The Omen”, and a hundred and one slice ‘n’ dice slasher movies. Once the new millennium dawned the studio execs were scrambling to find new ways of scaring their audiences. It was during this past decade that their eyes turned to the East for inspiration, especially to Japan where films with names like “Ringu”, “Ju-on” and “Kairo” were being released. Compared to Hollywood these films were low budget and technically unsophisticated, in fact some of them were released only to the video market in Japan, but regardless of this they focused more on old fashioned ghost stories than on bloodletting, and it was this focus on the that made them seem so revolutionary. One of the best examples of this loosely defined genre dubbed “J-Horror” came from “Ringu” director Hideo Nakata. Titled “Dark Water” (2002) it followed in the footsteps of such 70’s horror classics as Nicholas Roeg’s “Don’t Look Now” and Richard Loncraine’s “The Haunting of Julia”; films that married the traditional ghost story with complex psychological portraits of conflicted and grieving mothers.
Yoshimi Matsubara is a woman suffering through the terrible stress that comes from starting her life over again. She’s battling her soon to be ex-husband over custody of their 6 year-old daughter Ikuko, but he’s playing dirty, dredging up Yoshimi’s psychiatric history which includes depression, abandonment issues, and a nervous breakdown. Add to this stress her search for a new job after six years out of the work force and plus finding an apartment for her and Ikuko and it’s a miracle that she hasn’t had a relapse. Her love for her young daughter, though, is the one thing keeping her sane and she and Ikuko turn seeing one shoebox-sized apartment after another into a fun game. They finally find a place that is a little bit bigger, a little bit more affordable, and most importantly Ikuko loves it, so mother and daughter set up house, but shortly after the move in strange things begin happening. 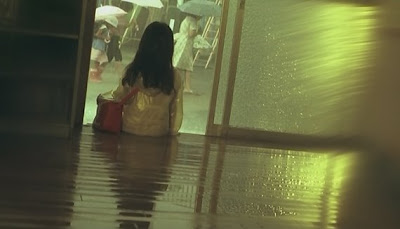 From the very beginning Yoshimi has felt a vague unease being in their new home. She can’t quite put her finger on it, but it slowly seeps into her like the water that drips continually from a leak in the ceiling. And no matter how homey Yoshimi tries to make the interior of the apartment nothing can cheer the grim, grey hallways just outside her front door. Ikuko begins acting strange as well. She starts to speaking to an imaginary friend as she soaks in the bath, and repeatedly disappearing only to be found on the roof of the building. It’s there that she found a children’s bag, red with a bunny and the name Mimiko emblazoned on it, but there seems to be something else drawing her to the roof and it isn’t long before Yoshimi is feeling the same pull. Of course all of this, the unease, the feeling out of place, Ikuko retreating into fantasy a world of fantasy, both mother and daughter wanting to escape, could easily be explained by the break up of their family. It’s when things start happening that can’t be explained by the divorce that Yoshimi questions what exactly is going on.
Trying to find the source of the growing leak in her ceiling Yoshimi makes several visits to the upstairs apartment, but no matter how much she knocks there is no answer. She notes the name over the door: Kawai. Ikuko continues to run off and the red Mimiko bag makes mysterious reappearances regardless of how many times Yoshimi throws it away. Things start to really get strange, though, when Yoshimi starts catching glimpses of a little girl in the hallways of the apartment block; wearing a yellow rain slicker, her long black hair obscuring her face Yoshimi is certain that she resembles a girl on some old wanted posters that are still posted around the neighbourhood. The name of the girl is Mitsuko Kawai, the same name as the locked apartment upstairs.
For those of you who have already seen “Dark Water”, and I’m sure there are many, I think you would agree that it is a very tense and at times terrifying film, but for those of you lucky, or unlucky, folks out there who have somehow missed this modern J-horror classic I would suggest sitting alone in a darkened room for this one to take maximum effect.
Posted by Chris MaGee at 7:23 AM